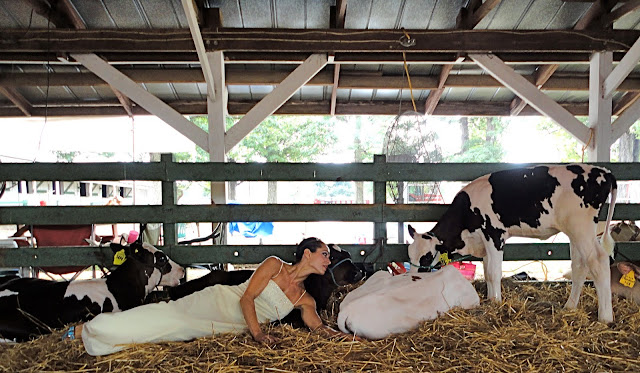 Lauralyn Brickhouse is a primitive artist, who in 2010, abruptly shifted her area of focus from drawing and painting - to a newfound obsession with "dash "photography. She was a diehard self-portrait artist for 3 1/2 years, during which time she staged innumerable shoots, sometimes in public venues, but her preference was to photograph herself against backdrops that featured dilapidated structures that she discovered on private properties. In Autumn of 2012, Lauralyn was charged with, convicted of, and sentenced to 6 months in jail (all of which was suspended save 22 hours that she spent in The Northwestern Regional Adult Detention Center, in Winchester, Va.) for two separate counts of trespassing. Following her arrest and convictions, she took a break from self-portraiture, and began instead to concentrate on capturing images that primarily represented the abandoned subject matter that consistently caught her attention, in and around her native Virginia.

Lauralyn has been residing on the Caribbean island, Anguilla, since July, 2014 - where the emphasis of the non-self-portraiture work that she produces using her iPhone 4S and her Go-Pro, along with the Instagram filters with which she edits her photos - is based on documenting the beauty and unique character of the island, her people and their pastimes, the sea and its creatures, and the historic architecture. Although her current surroundings imbue her work with an undeniably "lighter" tone than that of the photographs that she snapped in The States - her images depict Anguilla in a manner that is considered to be atypical, and a departure from traditional island photography.

In May, 2015, after taking a 15 month hiatus from dash photography, Lauralyn dusted off her trusty Sony Cybershot, and once again began staging self-portrait shoots. Additionally, she revived The Big Ugly by posting, and writing about her new images there.

Although Lauralyn's work has been exhibited in galleries on both U.S. coasts, she was ecstatic to have been given the opportunity to display her first solo exhibition, "Abandon" (a retrospective of her heavily abandoned-themed self-portraiture) at Duvall Designs Gallery in Millwood, Va., during the month of July, 2014.