One Thing Leads to Another...

(Do ya' see those little Army men glued to the fence post? Not really sure why they're there, but I was super glad that they were)


So, after a seemingly endless string of mediocre (mostly birthday and Christmas-themed) shoots, the pictures that I took at my kids' school, were a welcome relief and helped me to feel like I was finally finding my groove again. Not wanting to lose the sudden surge of momentum, I was eager to make the most of the remaining 5 days that my kids were to be away on vacation with their dad - by snapping as many self-portraits as I was able. There was however, one teeeensy weensy problem...I was kind of at a loss for what to shoot next. Before I had time to get all wiggy about it though - opportunity (glory be!) came a knockin'.

You guys may remember a post from October (Freaks Come Out at Night) in which I wrote about and included a couple of self-portraits featuring the handiwork of lauded body/face-painter Brady Neher. Well, as blind good luck, or fabulous timing, or serendipity (or whatever) would have it - Brady contacted me out of the blue, and invited me to come to his place on his next day off from work - so that he could paint just my face, while we hung out for the first time in months.

I have driven up the highway that leads to the town where Brady lives, many times before (although not since becoming infatuated with self-portraiture and panorama photography) and I've always found that particular stretch of roadway to be a nice blend of scenic meets quirky. But this time all of that seemed even more pronounced. I guess because by now, I am programmed to be more observant than I used to be. Nowadays I scour every route that I travel - searching for "long" and "tall" things to shoot in panorama, as well as venues in which to photograph myself.

Along the way I passed by the long-since shut post office at Gaylord (see above). I've seen this tiny landmark dozens of times in my life, but until the day that I made my maiden voyage up to visit Brady, I'd never really paid much attention to it. Now don't forget it, okay? Because before we reach the conclusion of what will be four consecutive, related posts - it will make another appearance... 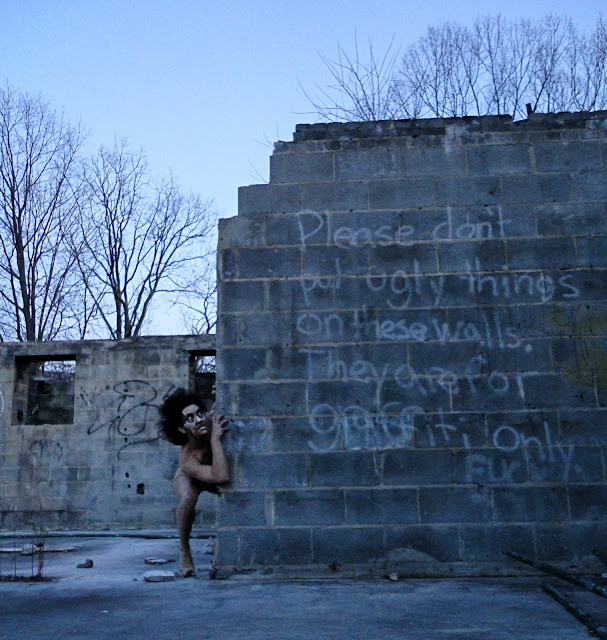 I had no idea what Brady had in store for my mug, but I brought along a couple of costumes that I thought would be generic enough to compliment whatever character I became, in the event that I did end up with enough time to take pics. of myself sporting my dramatically altered visage. Turned out, Brady hadn't settled on anything specific, he'd decided to just wing it, which was fine by me...

After working his trademark magic for a little less than two hours (a fraction of the 9 hours he spent painting my body, this past summer) Brady let me have a look at the finished product - and I loved it! In veering away from his usual vivid color palette and sticking with gradations of flesh tones only, he exaggerated my facial features and transformed me into a monster-like version of my real self! I was 100% totally stoked.

Before saying "Goodbye" and sending me on my way to do whatever I wished with my new identity, Brady mentioned that someday I oughtta do some self-portraits at a nearby, burned-down clubhouse and the adjacent, empty swimming pool. There was still about a half an hour of daylight left, and so I asked if he would take me there right then. He said, "Sure". I hurried out to my car and stood in his driveway, teasing the hell outta my hair while simultaneously considering my costume options (I decided to go nude...real shocker there), when a slow-moving vehicle stopped right in front of Brady's house. I turned around to ask, "May I help you?" and oh my gosh! The look on that poor guy's face as he was startled by mine? Priceless, I tell you...positively hilarious!

Aight so, I followed Brady to the burned-down clubhouse and, both of us well aware that I had very little time left to shoot before it got too dark (and too cold!), we bade each other a quick farewell, I removed all my clothing and got busy taking pics..

My naked body and bare feet, could only stand about 10 minutes of the torturous cold which radiated up from the frozen concrete slab, and became more crushing as evening evaporated and nighttime took over. It was frustrating to get so few pictures featuring Brady's artwork, but I made a pact with myself to return the next day, and tackle a completely different topic (or several) - during the hours of prime time sunlight. 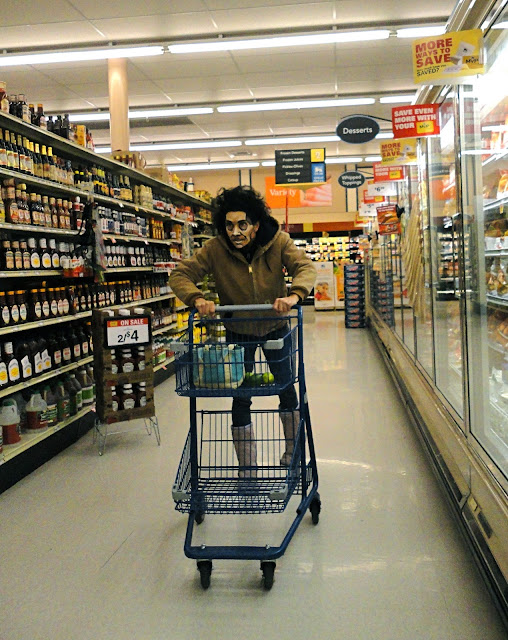 The heartbreaking thing about face and body painting - is that it's cursed with an extremely limited life expectancy. Just like the time that he painted my body, I felt it was a tragic waste to have to shower off all of Brady's hard work, especially after having only gotten a few (crappy) snapshots with which to record it for all time.

As I drove back home, I remembered that I needed to pick up certain key ingredients, if I was to indulge in my ritual evening cocktail(s). I pulled in to my neighborhood Food Lion to stock up, and to possibly sneak some more pics..

I asked the nice man who was bringing the shopping carts across the parking lot to the front of the store, if he thought it would be cool for me to go inside with my face the way that it was. He said, "Honey? This is Berryville. We've seen it all here before". I thought to myself, "Uhhhh...yeah. Summah dat was probably me"... 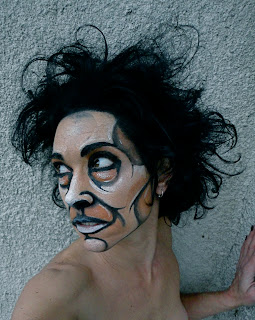 It's gross, I know...but that night I did not take a shower. I was hellbent on getting the most out of my Brady face and so I slept on my back, barely moving at all, and awoke the next morning with it (mostly) intact (you can kinda see where my dog licked my forehead). I got up bright and early, schlocked together a wild beast outfit, and went outside to photograph myself as an imaginary troll who presumably lived in the 7 year old burn pile in my yard... 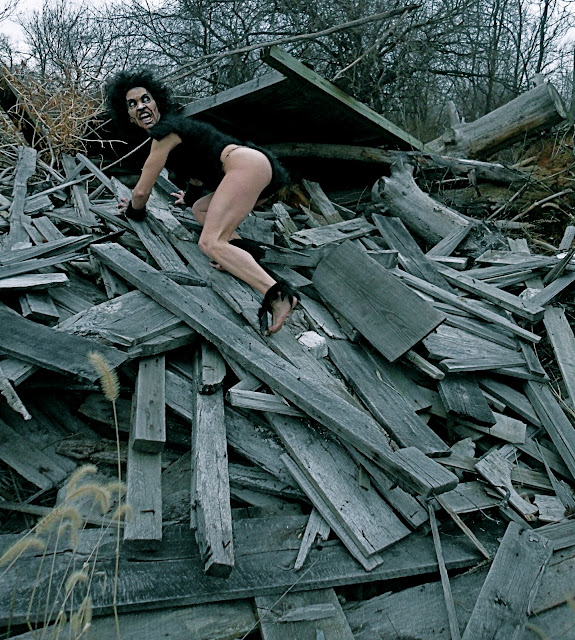 I took pictures in the 30 degree, overcast late morning, until my camera battery finally died. By this point though, I'd pretty much run the gamut, in honoring Brady's generous contribution to my own art. I didn't let myself feel guilty about taking that much-needed shower, partly because I was fairly well frozen to the bone, but more importantly - it was time to get ready for my sophomore shoot at those captivating, charred clubhouse ruins...