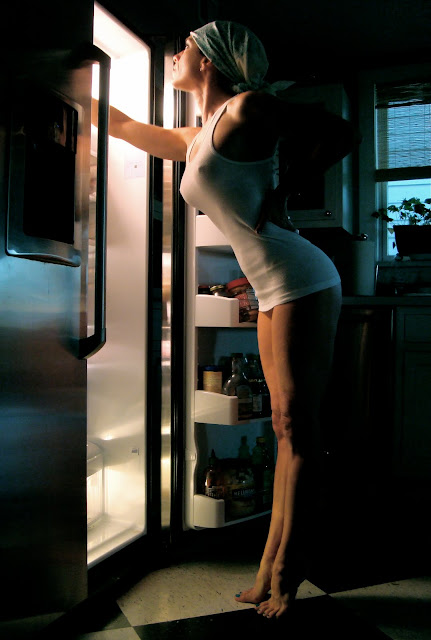 During the first 4 months of my 10 second timer self-portraiture mania, much as I loved my new hobby and longed to devote every minute to it - my schedule only allowed for one or at the very most - two shoots per week. Needless to say, I relished every opportunity to partake in such frivolity.

At that point, I still had yet to consider the option of taking my half-naked pics. anywhere other than the privacy of my home, so my thought process in planning each upcoming shoot was fairly basic: in which room of the house, or - where in my yard - should I stage each consecutive shoot. And in determining the "where" - the theme and appropriate, provocative attire - generally fell in line, somewhat effortlessly.

I guess given the nature of #HNT pics. and the limitations of only shooting in and around my house, as well as the fact that I was still such a newbie and my creative juices were just barely percolating, it was probably part of a natural progression that I ended up inadvertently dabbling in a cliche "pin-up"-style phase. The strangest part for me during this time, was to see this unfamiliar person appear in the pics. as I downloaded them onto my computer. I mean, the "real" me is a tomboy...a slob even - and goofy! I rarely wear make-up or give a rat's ass about what to put on my body most days. And so to see that vaguely familiar, scantily-clad (middle-aged!) woman - her face painted up like a ho' - working sexpot poses and come-hither gazes - was definitely a bit startling...to say the least.

The pictures from the above - "fridge shoot", were (comparatively) easy to capture, only in that - the room is quite small and so I had very little wiggle room as far as where exactly to place the camera. My only real option, was to set it in a cubby on a shelving unit that's fixed to the wall. Since I couldn't get my head behind the cam. to look through the viewfinder, it took a few tries to get the angle just right. But after that - it was pretty much smooth sailing. I did have to give the refrigerator a rest, after the upper bulb shut off from the door staying open for too long. But after a cocktail and a ciggy, I was right back on track.

Although I ended up with less pics. than normal, overall - I liked what I got. They are a tad dark and there wasn't much variety and they did mark the horrific (yet fortunately - tail-end of the) "big boom" era. But since I'm nearly certain that my ass is like half that size now...that part doesn't really bother me anymore. 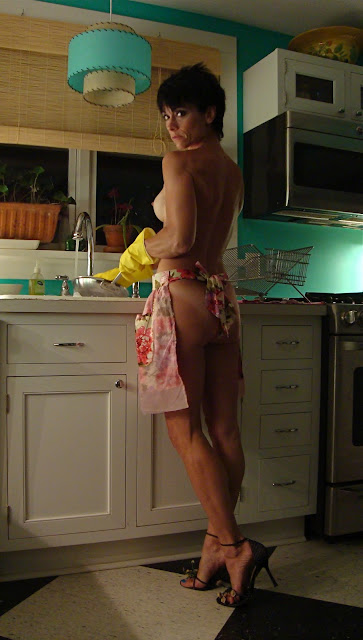 The instant it came to me, I was all over the kitschy concept of the "washing dishes with rubber gloves wearing only an apron" shoot...and because of its simplicity, I felt confident going in - that getting a heap of good pics. (in very little time) would have to be practically failsafe...The moral of the story? Keep your expectations LOW

Over the course of three separate, hours-long attempts (one in the morning, one - late afternoon, and the last ending sometime around midnight) to come up with something...anything - even just one measly picture to like - I wound up (mostly) entirely disappointed. Maybe it was because of the repetitiveness of never deviating from standing at that sink, for christsakes (for a total of what - 6 or 7 hours?!) that left me stuck in a rut and clinging to an idea, that bottom line - produced nothing nearly as compelling as I'd hoped. But rather than give up completely, I kept coming back to experiment with the changing light of morning, afternoon and night...and in the end, out of a couple hundred shots, I ended up with at least a few that I didn't totally hate...meh... 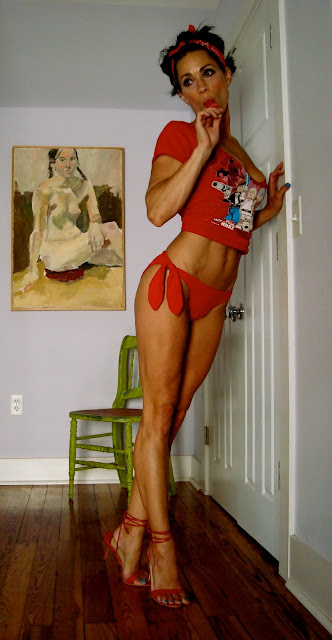 The "popsicle" shoot was different, and I can't put my finger on why, precisely...maybe I'd gotten more than my usual 4 - 6 hours of sleep the night before? I dunno...but I liked how I looked in the majority of the 100 or so pictures that I snapped that day, and unlike the "sink" session - my reason for taking so many pics., was because I felt that since I seemed to be on a bit of a roll, I oughtta stockpile as many good pics. as I could.

My only problem with this shoot, was the fact that I had to eat 10 - 15 popsicles over the course of the day. I'm a low-carb gal, and so - not only was it a shock to my system to ingest such a large dose of sugar, but I swear I'm not exaggerating when I tell you that - by the time I took my next set of pics., my rear end was noticeably bigger! 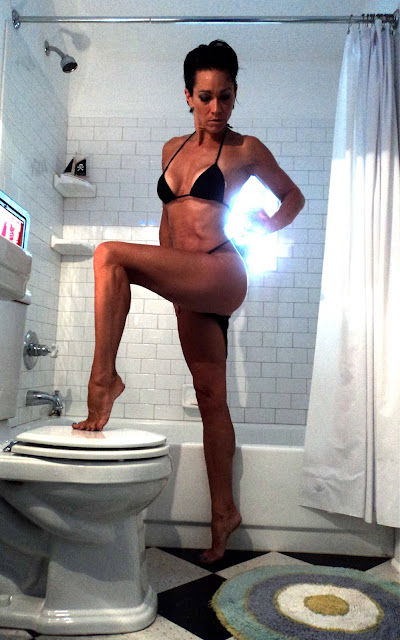 The only thing I have to mention about the "bikini in the bathroom" pics., (besides the fact that my face looked haggardly AND - the tag on my bikini top was visible @#%&*$) is that I just wanted the whole thing to be over in a hurry. Why? I'll tell you - because this bathroom is haunted by our little girl ghost...*shiver*...How tha hell else do ya' think I could keep it so clean? Lord knows no one in my family would ever dare use this bath...(among other odd occurrences, the toilet flushes at random - which we all find raaawther disconcerting...)