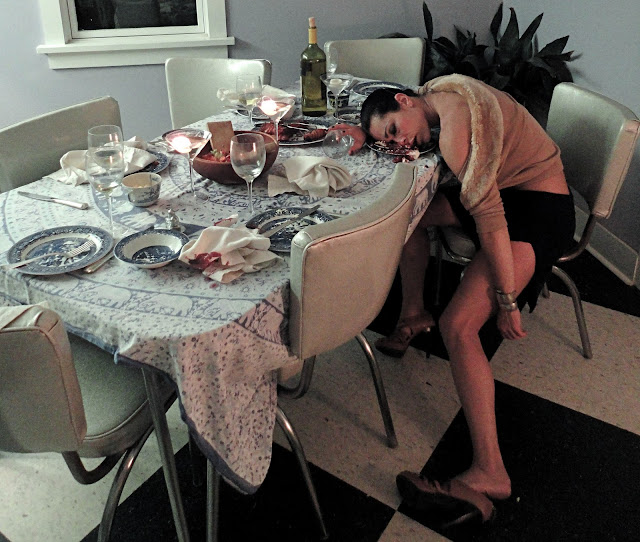 My kids had a bunch of friends over, last weekend - and as a sort of precursor to the feast that the grown-ups would fix for Thanksgiving just a few days away, my middle daughter and a couple of her pals manned the helm there in my kitchen, and prepared an elaborate repast for themselves and the rest of the children. Ever the opportunist - I offered to set the table with the good china and silver not only so that the wee ones could enjoy the fruits of their labors in elegance, but also so that when they were all through with dinner, (but before the table had been cleared) I might use the tableau as the setting for a few self-portraits. And here I'd been thinking I wouldn't be able to take any pictures while the kids were with me that weekend...guess I showed me!

Several of the girls hung out and watched for a few minutes, but after face-planting in a plate of whipped cream-covered mixed berry shortcakes again and again, the novelty kinda wore off and they left me to my own devices, while they went in search of something more interesting to do. Admittedly - I did not exhibit the full extent of my range in this shoot…this set is more than just a touch boring, if you ask me. 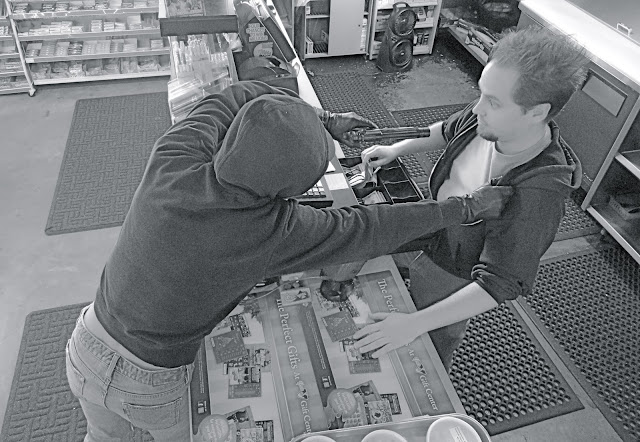 
The mock "stick-up" was one of the shoots (no pun intended) that I mentioned last post - for which I'd been given permission earlier in the week - to come back and do at a later date. The store owner and I picked last Monday to be the day when I would return to stage the bogus heist.

I have never been as anxious before any shoot, as I was - leading up to this one...I ain't lyin'. Beginning midday the Sunday before, my stomach got all tied up in knots after my imagination started getting the better of me. I kept thinking about things like, "What if a customer walks in while I have the gun pointed at the clerk, and then ducks out of the building to go call 911? After which the cops burst in - guns a-wavin', bullets flying. Or what if some average Joe who just happens to be packin', takes matters into his own hands by actin' a trigger-happy vigilante? That actually might kinda suck." I also worried about being a nuisance to the employees, lord knows they're already busy enough without having to cater to my selfish needs...

But every person who worked there, could not have been more obliging. The whole thing turned out to be a crap ton of fun! I could not believe how cool the guy at the register was with me brandishing a firearm (albeit a toy) and pointing it directly at his face.

Only two customers walked in to catch me red-handed - the woman was super freaked for a sec, but after we explained everything she laughed. And the man just shrugged and mumbled something inaudible...

And...although an officer of the law did come in to shop, he was none the wiser to my charade. WOOT!

Everything went far more smoothly than I'd imagined it would, but even so - it wasn't until hours after I'd packed up my gear, thanked the store employees and got in my car to go home, that I finally started to calm down a bit...it was like the hugest adrenaline rush of my life, and by far the most enduring.

THANK YOU! To ALL of the wonderful peeps at my fave corner market - for allowing and helping me to try my hand at larceny - it was a day that I won't soon forget! 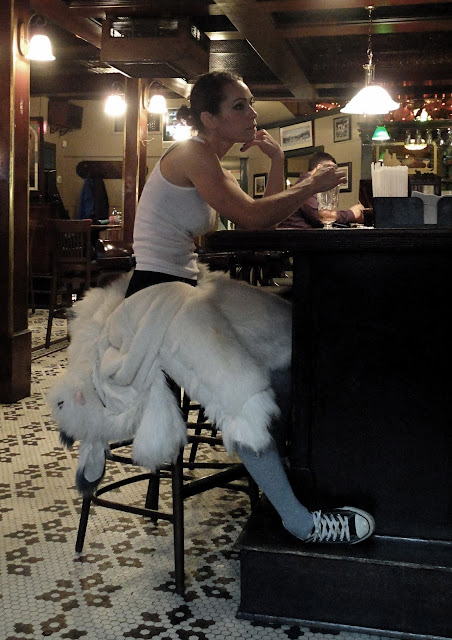 So, a dog walks into a bar, "How are you doing?" asks the bartender.
"Ruff" the dog answers

Don't ask me what the deal is with the dog costume, cuz I honestly couldn't even tell ya'. I just saw it in the dress-up pile and decided to try and make it work...even though it is a child's costume and I couldn't put it all the way on without suffering an alarming degree of crotchal pain...ooof.

The bar owners were totally fine with me doing my thing (THANK YOU, THANK YOU!) especially since it was at 2:00 on a Tuesday afternoon and the the place was quiet, for the most part. The only problem I had was that in order to keep things authentic, I did actually order a drink...and then one more...and then a nice man who was clearly puzzled by my unusual behavior offered to buy me a drink...and then another. Having only had 4 Tbs. of peanut butter for lunch that day and that many cocktails to boot, by 5:00 - I was fairly well-lit. But the good news was - I didn't havta drive home anytime soon, since the nice man who bought me the drinks, also happened to live in an old, haunted building right across the street from the bar...So... 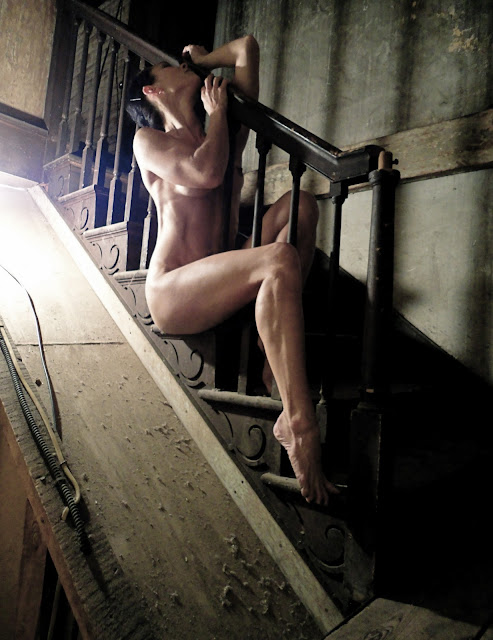 ...I let him give me the tour of his apartment building and the skinny on the ghosts that inhabit it, and the instant I set foot in that creepy, dank attic - I knew that I just had to take some pics. up in that piece.

Of course, with no other costume options besides my boring old street clothes and the now obsolete dog get-up - I was forced to rely on the default...my birthday suit.

Too bad you can see the imprints from my knee socks and bra...see, that kinda thing really irks me.

I was up there shooting for ages, it was cold and dirty but I loved it! By the time I was done, my buzz had worn off and I was home by 7:30 to download the pics.. 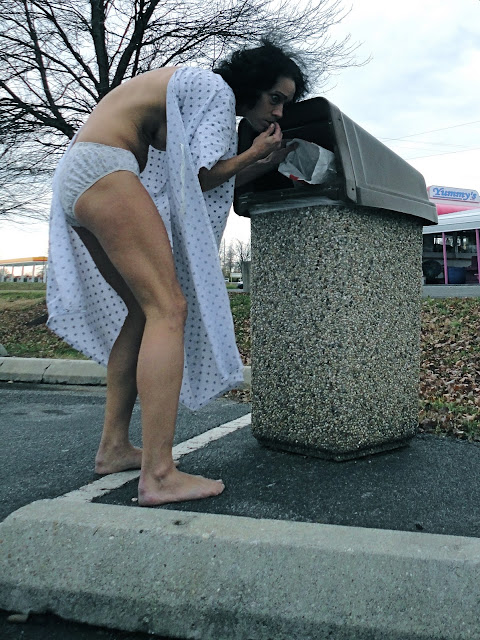 Thanksgiving is a holiday which anymore - I don't feel particularly motivated to celebrate, mainly because I don't really do food or family (outside of my offspring, of course) But for the past two years my children have spent Thanksgiving with their dad and his family, so it's becoming a tradition for me to celebrate Thanksgiving by working.

I wanted to do one more set of pics. wearing the hospital gown, before I laundered and returned it to the Emergency Clinic. And what better day to act like an escaped mental patient digging through a trash can for food, than one of the only days of the year that the fast food restaurants are shut.

I shot two pictures before a car pulled into the otherwise barren parking lot, and the driver - a woman - sat in her idling car, staring at me and my little freak show. I had a feeling she was gonna call the cops, and after I got my 5th frame - lo and behold, who should appear? But a county sheriff's deputy - surprise, surprise.

It was a lady cop this time, and she was awesome. She could tell from the outset that I was not certifiable (although I almost wonder about my true mental state, since I actually did eat french fries from the trash) and while she ran my driver's license number through the system, I took the liberty of changing clothes in my car, really quickly. The lady cop drove her patrol car over to where I was just finishing getting dressed, and she got out to tell me the good news - that I am not wanted for any crimes, phew! (I was a little afeared that the incident in the park the other night, might somehow come back to haunt me) and then the bad news - that my driving record ain't so great (which believe me......I already knew)

As annoyed as I was that the nervous nelly had blown the whistle on me, at least I could add "not getting arrested" (again) to the list of things for which to be grateful that Thanksgiving. 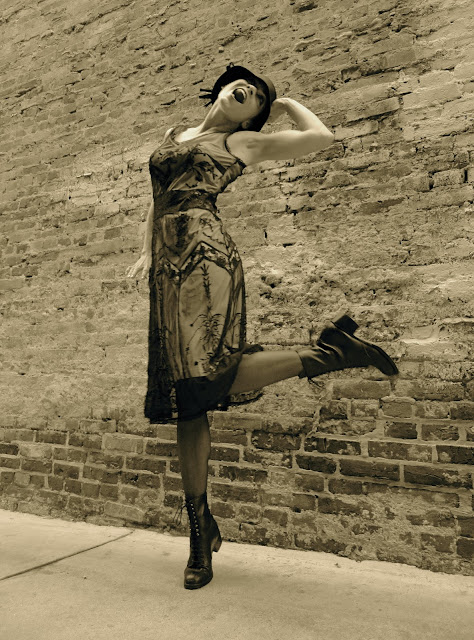 (Wait a minute...is that a piece of gum hangin' outta mah mouf? For shame!)

Disappointed that the photo spree that I'd anticipated had not materialized, I went back home and regrouped for another shoot. I decided to play it safe, this time - and planned something for which I would wear acceptable clothing and not do a thing that could get me in trouble. And as you can see, in being overly cautious - the photos also turned out to be painfully "safe"…Ruff.
Posted by Big Ugly at 5:31 PM