Another Boring Day at the Office 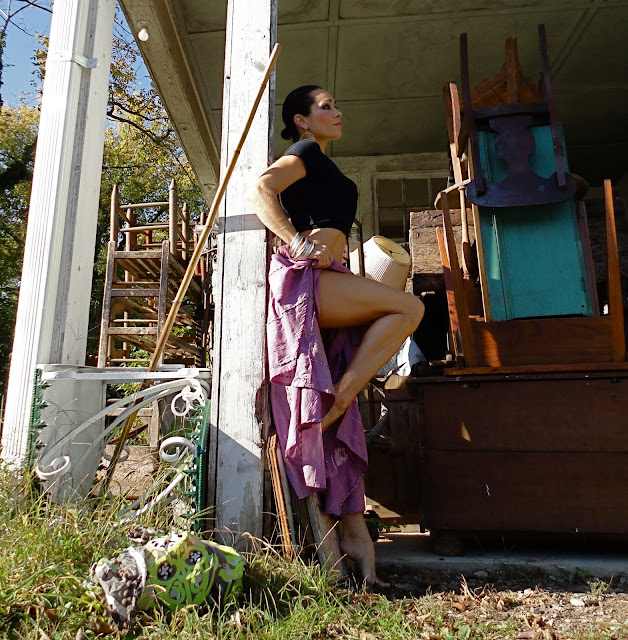 Unlike this Monday, last Monday was devoted entirely to takin' a ton of pics.. It was warm out and sunny, I had what I thought were a few clever ideas in mind (all of which could be tidily staged within the confines of a tiny nearby town) and so, bright and early that morning, I gathered the stuff that I needed for three of the four very different shoots, piled everything into my little car, dropped my kids off at school, and drove a whopping 5 minutes to the veritable gold mine of glorious settings in which to stage the day's pics..

I'd kind of imagined having the sleepy, little hamlet all to myself (Mondays are usually dead around there) but lord have mercy - I could not believe the unrelenting flow of car traffic passing the antiques store, out front of which I was busily channelling my inner gypsy. It was more that I was surprised than that I cared about so many folks slowly creeping past, craning their necks to try and make sense of my queer behavior (you know how much I love it when people watch!) But after this super grungy redneck parked his truck mere feet from my camera, got out and made the executive decision to stand there and watch me....I suddenly found myself wondering, "Hey! Where'd everybody GO?!" Literally the instant the scuzzball helped himself to my shoot, it felt like we were the only two humans on the planet...me no likey.

His rude intrusion made me terribly uncomfortable and I could feel my poses becoming more awkward and reticent with each shot (well, can you imagine?) The guy was totally crampin' my style and when it occurred to me that I was wasting way too much time snapping half-assed photos, I finally couldn't take it anymore. I told him that I was finished and to have a nice day and I carried my things over to my car.

As soon as he was out of sight though, I went back to the antiques store, got into character and took at least a few pictures that were more to my liking... 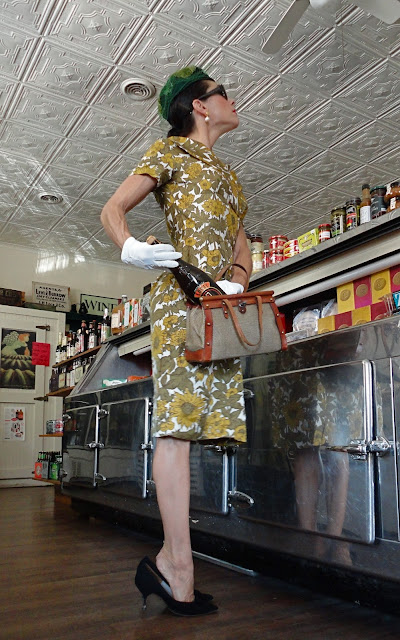 Next stop? The gourmet grocery across the street...

I'd been wanting to do a kitschy shoplifting series, hoping for something silly to post on the future STORE page on my blog. After the owner of the market kindly allowed me to have free reign to do (with in reason) whatever I wanted - I finally saw that concept come to fruition...But only after taking roughly 75 photos with very little variation in my positioning. Why so many? Because if I didn't get myself in just the right spot, that stupid air conditioning vent took on the appearance of an unfortunate hat adornment, or like it had been hurled at and had lodged in my face or my neck...awesome... 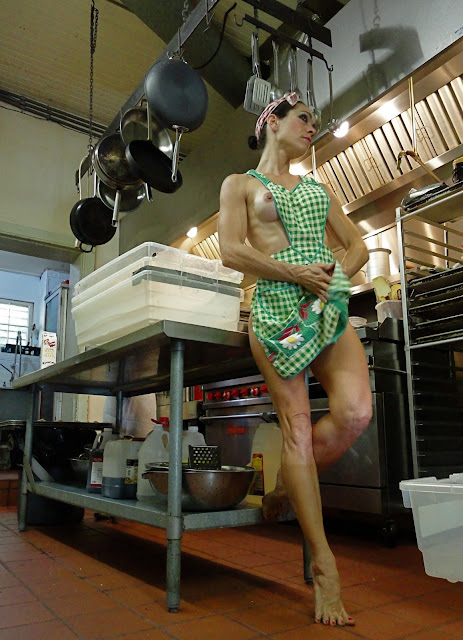 Does this outfit make my boob look fake?

(on second thought...don't answer that)

Before the fire extinguisher salesman arrived and my camera battery petered out, I was able to capture about a half-dozen naked(ish) chef shots in the kitchen. I gotta give props to those wonderful women who work back there. Not once did they ever give me any reason to worry that my self-indulgent shenanigans were impeding their productivity. When in all actuality, I was undeniably underfoot...(Thanks, ladies!) 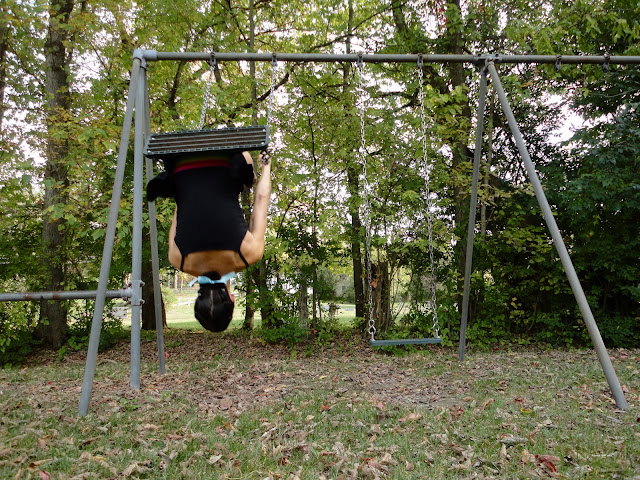 
I went home to download the pics. that I'd taken so far, while I waited for my camera battery to charge, and simultaneously I tweaked the deets of the day's final shoot. I hadn't challenged myself physically since that 2nd set of bridge pics., and so was way overdue for a shoot where my body in motion was the focus...not costume or backdrop or theme.

The kids and I had walked past this old school playground a couple of weeks earlier, and upon seeing it I immediately got the idea to do that backflip off a swing trick thingy...do you guys know that one? If you don't, it's a little tough to explain...and sadly, it was also nearly impossible to photograph effectively. I never bargained that something that I was sure would be a cinch - would wind up frustrating me as much as this did. Like seriously, how in the world could swinging prove to be more difficult than say - the windmill deal?

The few times that I did manage to capture myself mid-flip, I was entirely unimpressed with the results. Even from the side angle, it really looked no better... 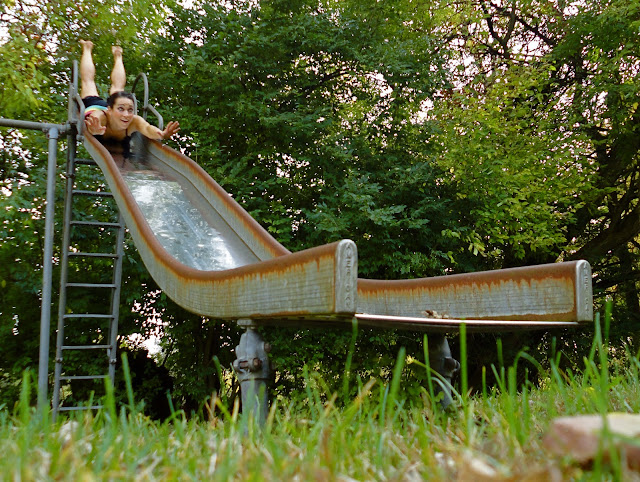 ...and so this became the obvious default...*snore*...Love how the slide looks! But that's pretty much it...