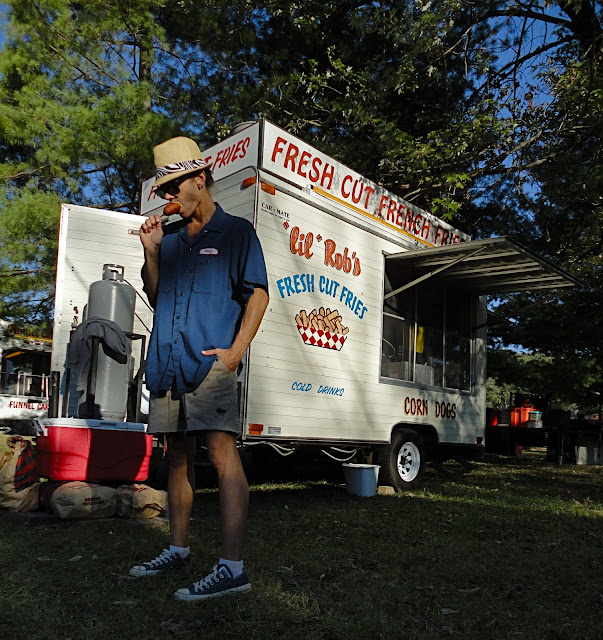 Yesterday, my tiny little town celebrated its centennial by closing off Main Street to car traffic, in order to make way for a parade and a couple blocks-long party. I had every intention of stopping by the festivities - not so much to join in on all the fun - but because I liked the idea of snapping self-portraits under what I suspected would be the disapproving/bewildered eyes of the assemblage of small-town onlookers.

The night before, I had joked with friends on Facebook, about taking naked shots at the parade - but I mean c'mon...did I really wanna get hauled off to jail? No. So I hatched a more reasonable, albeit less spectacular plan (see above) one which I believed would earn at least a few nasty sneers from a predictably disparaging peanut gallery.

The only caveat to everything going as I'd envisioned, was that I had also committed to watching my daughter's field hockey game (at her school an hour and a half away) and bringing her back to my ex for the weekend. By my estimation, I should be able to fit in both activities, although I'd likely have to miss the big parade. But certainly there'd be plenty - still under way, when finally I descended on Boyce at (my e.t.a. of) 3 o'clock...right?

WRONG...For one thing - I didn't pull up to my house until 4:45 that afternoon...soooo much later than I'd hoped. I speculated that surely by then I had to have missed the bulk of the celebratory goings-on - but I figured, "Hey. I'll never know unless I go and see" So...

I haphazardly gathered the essentials for my ensemble and proceeded to (attempt to) transform myself into a dude.

Yep, my hunch was dead-on. By the time I got to Boyce, most everyone had left and things had essentially come to a close...drats. Fortunately though, the concession stands were open - so I lucked into documenting myself demolishing a corn dog. Talk about devotion to one's craft, sheesh!...Under no other circumstances would I have eaten that crap (it was tasty though...I have to admit) 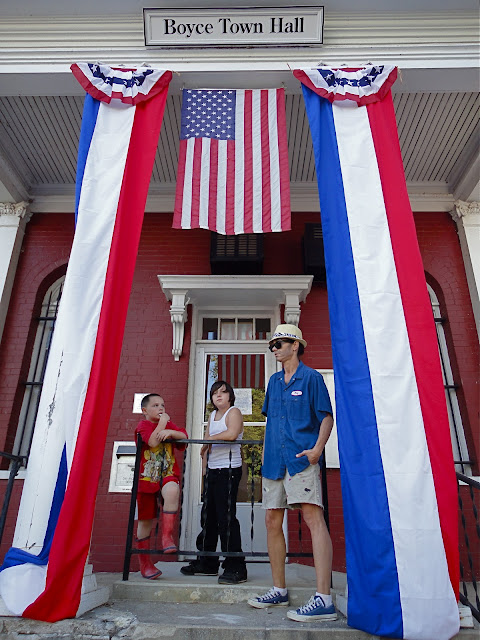 
I snapped one corn dog's worth of pics., and then strolled to Town Hall, where I introduced myself to a father and his kids, who were chillin' out front on the steps. I explained to them that I take pictures of myself in various settings and scenarios and that today I was tryin' to look like a man. They were visibly confused (see how that one boy was beepin' at me?) and yet - completely cool with me doin' my thing.

After taking one photo (with only me as the subject) I invited the two boys to join me if they wanted...and they did. Their big sister made a guest appearance a little later on. It was a hoot, they were great and I thought it so clever when the boy in the middle suggested we line up with our shirts in order - red, white and blue. Now that I think of it, this may have been my first set of pics. ever taken with folks other than me in 'em...so there's that. 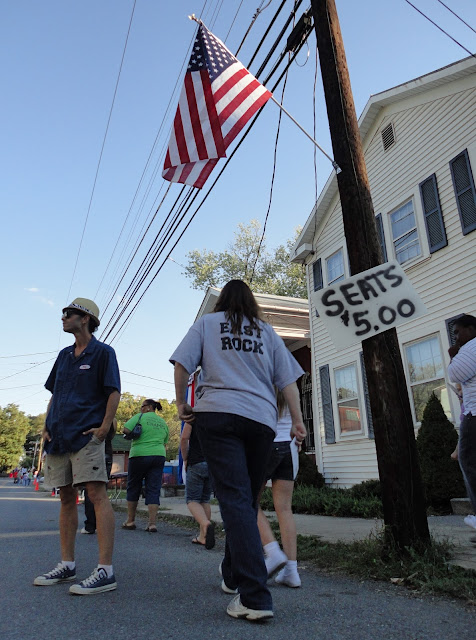 
As the last few stragglers departed the big shindig, I took the liberty of snapping some more pics. in their midst. And yes...I got the hairy eyeball from most, and derogatory comments from many...Could someone please tell me why I get off on that shit?... 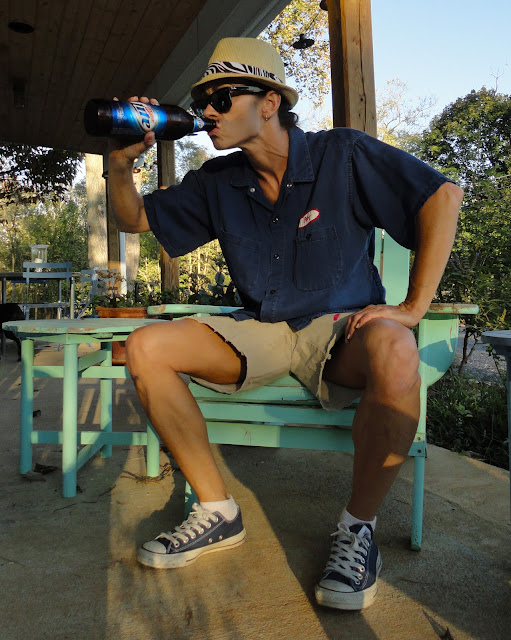 Mission (mostly) accomplished, I went home to partake in an even smaller celebration - for having done my very best to be a MAN. I grabbed a jumbo Miller Lite (and just who left that in my fridge?) and after only 3 swigs, I moved on to my girly vodka drinks...*urp*