Outta the Mouths of Babes

This post (along with my renewed vows of devotion to self-portraiture) is dedicated to my 11 year old son...man do I ever love that kid... 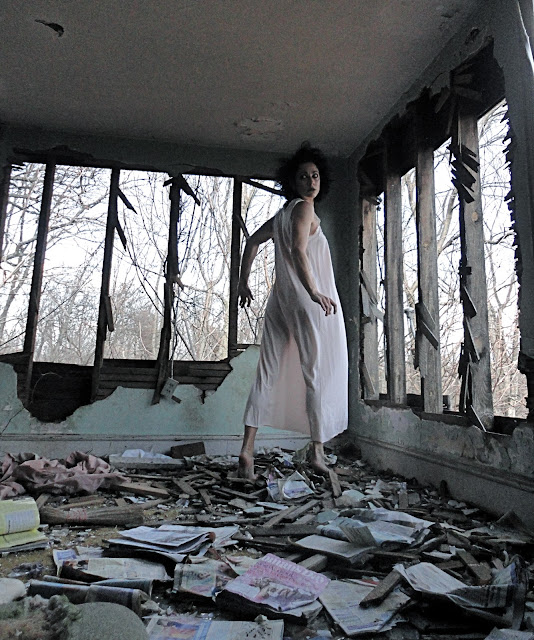 So...about a week ago, I proudly unveiled my Little Pretties photography blog to my children. They seemed to like it ok, but I was expecting a slightly more enthusiastic response? Especially since I thought they'd be relieved that I've been writing about and snapping pics. in which I never appear at all (much less naked or doing something naughty).

After barely even bothering to feign interest in my new project however, they went back to doing more exciting things like homework, and showering, and brushing teeth. Perhaps in response to the unmistakable "WTF?!" look on my face, my son changed the subject with, "Do you ever do your pictures of you anymore, Mom?" I was like, "I dunno...yeah sometimes. I took those ones in the snow, recently...remember?" And although I was prepared not to like what he'd say, I continued to answer him with a couple more questions, "Why do you ask, little buddy? Are you glad that I haven't been takin' as many?"

I kept my composure, after hearing his response...although there was definitely some water in my eyes...

He answered quickly, in a quiet voice, his eyes downcast - it was almost as if he'd wanted to broach the topic for awhile...but he just wasn't sure if he should. And when my precious only son gave me the straight skinny as he saw it, saying (something to the effect of), "I think your self-portraits are the best out of all the pictures you take. Like, they're the ones that could actually make you money"...I was dumbstruck...

I hugged and thanked him, without going overboard...meanwhile on the inside - I was fist-pumping and turning cartwheels and fighting tears of joy. The realization that my 11 year old son wasn't at all embarrassed by my photos (the very same photos that many grown-ups can't handle) and was (in so many words) nudging me back into self-portraiture - was unequivocally the best thing to have happened in a very long time...

I lay in bed that night, plotting my mini-renaissance, which would begin without delay...the very next day. 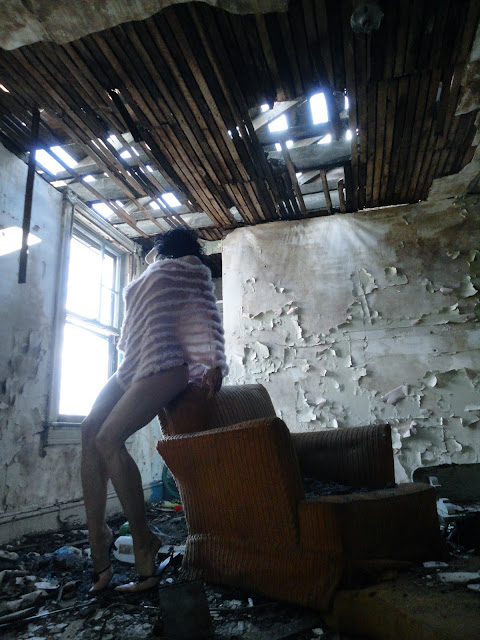 Just as the weather man had predicted, the next morning was sunny, breezy, and unseasonably warm - and I awoke knowing exactly where to shoot.

Over the summer, following photographing myself on his family's farm - one of my son's favorite friends told me about a spooky, old house that he and his brother had heard of, looked for, and found. His description of the place, along with his account of the only time he'd ever been there - was intriguing as well as unsettling. He spoke of gang graffiti, and a burned up mattress, and a tree that had fallen onto the house. He said that he and his brother had caught glimpses of suspicious shadows, and they both heard a man shout, "Get away from here!" Nevertheless, my son's friend and I agreed - that if I could be brave enough to go there alone - it would be an excellent spot for self-portraits.

Since first hearing about it, I had always kept the spooky house filed away as one of those "Eh...I'll get to it someday" locations. I don't know if I was too lazy or too chicken, or what - but I consistently put other shoots ahead of it in line. Last Monday however, I could think of no better venue in which to celebrate Spring's early arrival, and my emergence from an unplanned hibernation. 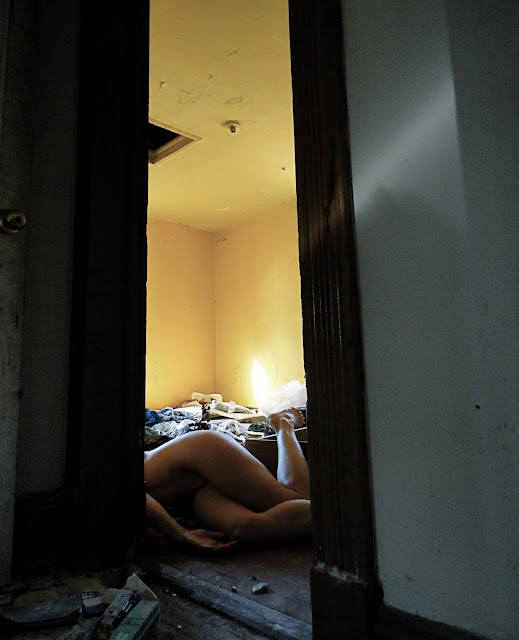 Not even in my wildest imagination - had I pictured the place being even close to that level of disgusting or terror-inducing. From the moment I snuck around the red gates to set foot on that godforsaken homestead - throughout the entire two plus hours that I shot my pics. there - and even for an hour or so after I'd left - I trembled and my stomach was all done up in knots...it felt so damn good to be back in my element.

I couldn't find the house at first, and since I was still trying to figure out if anyone besides me might be on the property (I'd noticed fresh tire tracks in the muddy driveway)...I started off by settling in slowly, snapping Holga pics. of the dilapidated out buildings and random, scattered debris.

I wish that I had a soundtrack to accompany this post....The wind had picked up substantially by then, and each time it lifted enormous sections of metal roofing up off of the collapsed barn rafters, and then slammed them back down with remarkable force - I just about leapt from my skin.

Eventually I did find the spooky, old house - tucked deep into a corner of the abandoned farm. I hesitantly approached it, chanting in just above a whisper, "Hello? Is anybody here?" Torn plastic stapled to pane-less windows, whipped and flapped wildly in the wicked wind...and an aluminum storm door that repeatedly swung open, clanging hard against the side of the miserable house - made certain that I did not become complacent. I was seriously as close to crapping my pants, as one can be - without actually doing it...it was awesome...

I worked my way throughout the entire house, taking an absurd number of pics. with my iPhone and Holga...and when I reached the last room on the upper level - I knew it was time to break out the Cybershot and do what I'd really come there to do... 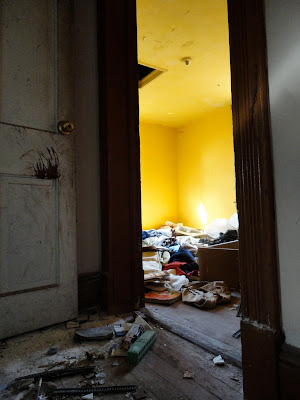 For the duration of my time spent on the farm and in the house, I was way more worried about a confrontation with a real human...than of being startled by something supernatural. But while taking the pictures of myself in the yellow room, things definitely got a weeee bit weird. I would set up my camera, making sure that everything I wanted in the frame - was there, i.e. the train cars on the floor and the child-sized claw marks on the door (creepy). But every time I checked the pictures to see how they looked, they were either blurry or totally different than how I'd set 'em up. It was like the camera tipped up or aimed right, at the last second. The only photo of the whole group, that was even close to being right, was this test shot that I took, before I got started snapping selfpics.

Frustrated over having gotten yet another bad shot - I was like, "Ok...what the freak am I doing wrong? How am I screwing these up so badly?!" and right then the door to the yellow room slammed shut so hard, that the whole house literally shook. That relentless wind had come in through broken windows and busted walls, absolutely howling through the hallways and rooms, all afternoon - and the door to the yellow room had never budged before that. I took it as a sign that my time was now up. I got dressed, grabbed my gear - thanked the old house - and got my ass outta there, in a hurry... 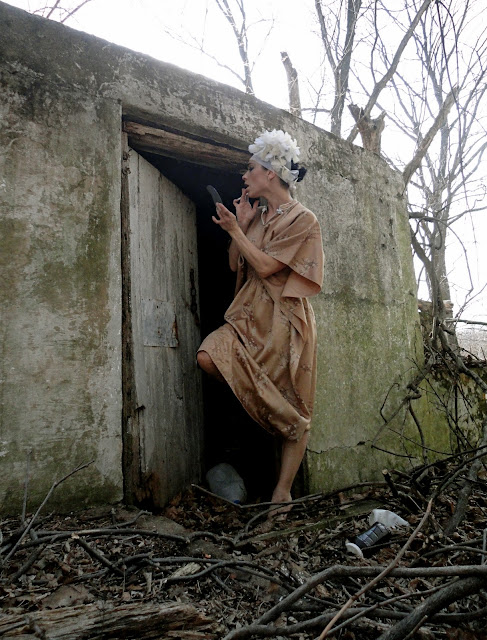 (You wanna know the really crazy part? I went back to take more pics., just a few days later...yup)

Honestly? If it wasn't for the combined input of my son and his friend, I'd probably still be sulking around here, pretending to be fine...

But I'm not! Cuz Winter Break is over, Baby - and I've come out of hiding...thanks entirely to the candor of an eleven year old boy...