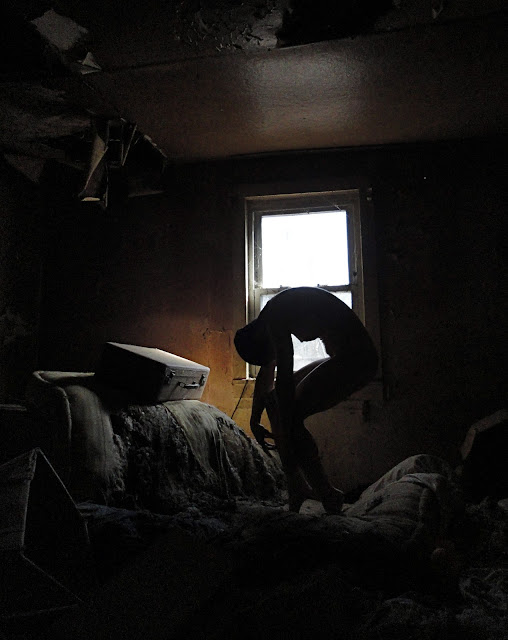 In case you haven't noticed, I am absolutely ga-ga over old buildings...and the more dilapidated or neglected they are - the more helpless I am to KEEP OUT!

Only a few months into my obsession with self-portraiture, I began featuring the patina of creepy, crumbling structures - either by posing against their exteriors, or scuttling through broken windows and the occasional, conveniently open door - in order to stage my pictures inside. Both scenarios are intimidating in their own right - and just as the reasons for such, greatly differ - so too does the degree of corollary anxiety.

Although it is thrilling to stage self-portraits in public spaces, knowing any number of people might witness my antics - the spike in my blood pressure, and endorphin-like high that occurs from the more covert of my shoots - is thrilling to the nth power.

Posing in plain-view of passersby, has its perks - but in general, I know what to expect. What really gets my heart pumping, is fear of the unknown - when I enter abandoned buildings...alone. I'll tip-toe around, while trying to determine if someone else just might be in there, but even when I'm sure I have the place to myself, I never stop wondering if a stranger will appear to find me naked in the midst of a shoot. I also worry about things like...falling through rotten floor boards, or worse yet - causing a catastrophically crippled building to completely collapse (there've been times when I believed this could actually happen). Also (now that it's Springtime) the hibernating critters are slowly coming out of their slumbers. I've been preparing myself to be startled by snakes (eep!) and whatever else might lurk where I'm shooting... 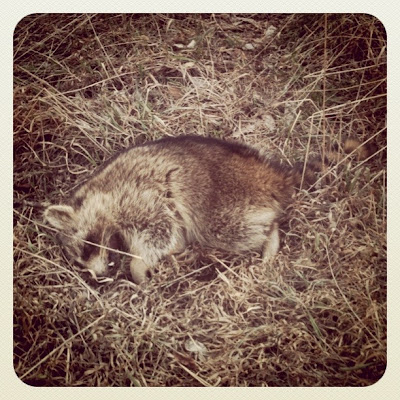 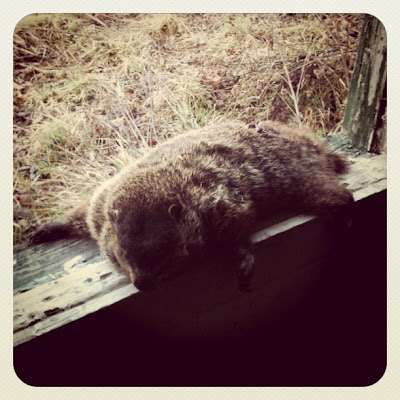 It was bad enough to come across these dead creatures, recently...but the thought of being mauled by a live animal? Huh uh...I'll take a human predator over that, any day. Wouldya look at the fang in that poor raccoon's mouth...and god only knows if the damned thing was rabid... 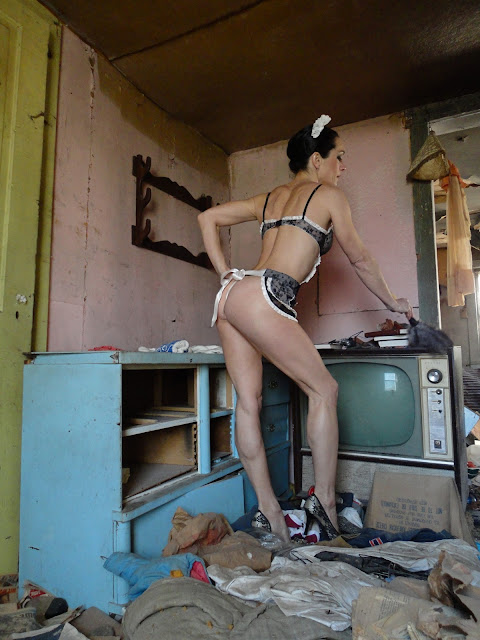 The self-portraits in this post were taken on two separate days, at an arrestingly grungy 4-room hovel - with which I fell madly in love while snappin' pics. with my phone and my Holga, one day. During that first visit, I was neither mentally geared-up, nor logistically prepared to photograph myself among the abundant debris, but before I'd returned to my own house that evening - the cheesy French Maid shoot was all but mapped out...

I had everything I needed except the feather duster (those things are surprisingly scare, fyi) but as soon as it appeared in my mailbox - I packed up my gear, hopped in my car, and returned to my new favorite hovel.

It's hard to pinpoint why I like the place so much. I mean for starters, the smell of urine nearly knocked me on my ass, like..."filthy" doesn't begin to describe that type of nasty. There are spongy spots in the floor where you couldn't pay me to step, and walking barefoot through all that garbage had me wondering which would happen first: exposure to an horrific disease? Some sort of parasite boring into my body? Or a savage attack from a wild animal I'd disturbed. And although it was 50 or so degrees outside, and even with the windows and doors open or broken - the temperature inside of the house remained considerably cooler than it was outside. After posing and snapping for only an hour, the damp, chilly air took its toll...I was shivering and couldn't feel my feet anymore, so I thanked the little hovel (for allowing me to be there) and went home to get warm...and clean. 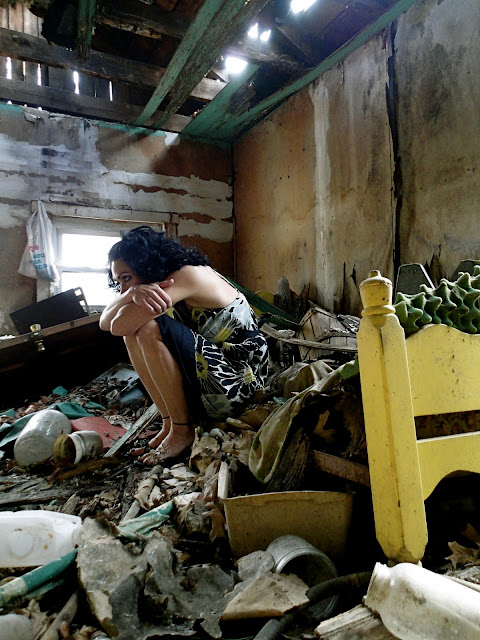 I couldn't stop thinking about the hovel and its treasures, and so a week later - I went back to take self-portraits in the two rooms that I had yet to exploit.

I arrogantly strode in through the open backdoor, and this time I wasn't nervous at all...unTIL! I heard something big (I dunno...like the size of a possum?) zig-zag across one of the rooms, before clambering up to the attic. So much for not being nervous. The blessed thing (whatever it was) stomped around above my head, for the duration of my third day of pics. at the hovel. I was so relieved that it never fell or jumped down through the gaping holes in the ceiling - and onto or at or even near me at all.

I know this is gonna sound crazy, but - it was almost as if the hovel had protected me. By now, I've spent tons of time in lotsa forsaken buildings, and where some literally make me feel like I'm intruding or unwelcome, the hovel always seemed to want me there...cuz it was lonely...and grateful to have the company, perhaps? I was never harmed by the big, scary beast...far as I know I haven't contracted any wicked diseases...and believe it or not, I even trusted the old hovel to let me step safely on the spot where earlier I claimed I couldn't be paid to step. Miraculously, I didn't fall through that part of the floor - which has caught buckets of rain for years, I'd imagine. The trade-off though, was having to repeatedly sludge through the grodiest crud (I shudder to think what it was) which squished through my toes - sorta like play-doh...except for this stuff was brown...and it stunk. 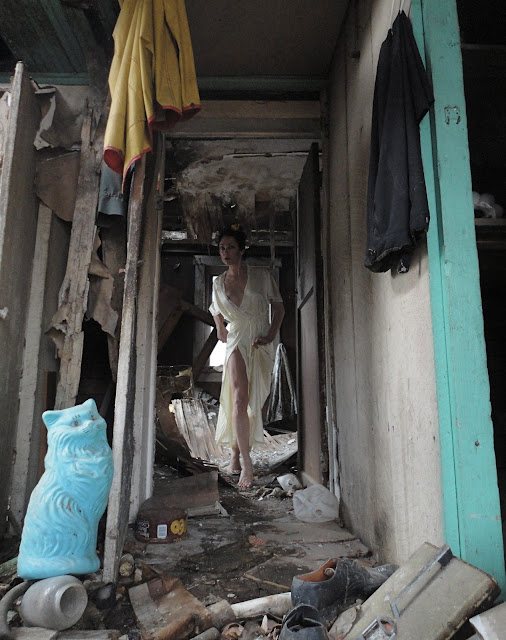 So after three safe and productive trips to the hovel, you would think that I'd gotten the silly thing outta my system. But I like that little dump with its eerie assortment of contents, and I sincerely enjoy being there...aaand knowing me, and my ongoing affliction with addiction...I'll probably visit it again...