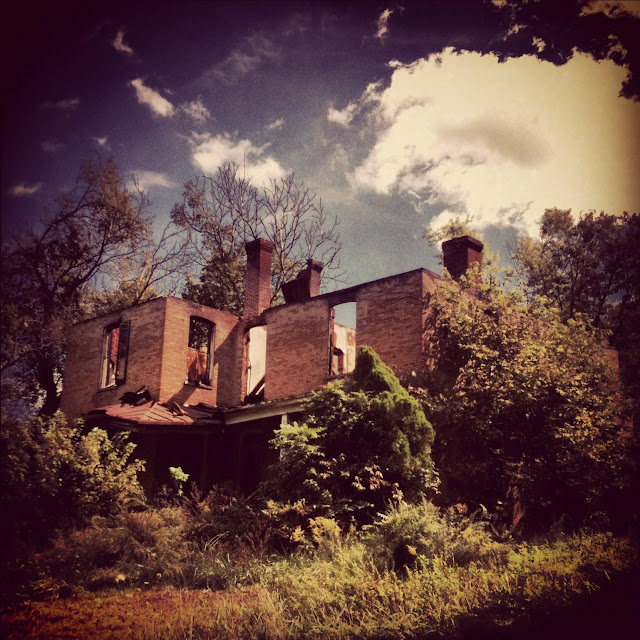 I noticed this exquisitely divine, burned-out shell of a house - while out on a motorcycle ride with a good friend, maybe a month ago? My head spun around, as my eyes stayed locked on the towering structure - until I was forced to put them back on the road out in front of me...lest I inadvertently veer into the opposite lane, and straight into oncoming traffic. As soon as I saw it, I knew without a doubt, that sometime in the not so distant future - I would go there alone to take pictures with my phone, and to stage some self-portraits, as well. 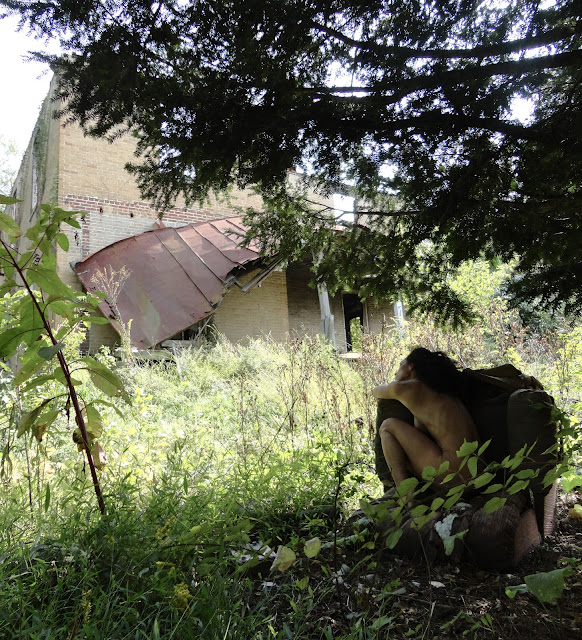 Yesterday marked the third time in a week, that I've snuck onto the property, climbed inside of the scrumptious ruin through one of its many inviting window cavities, and taken pictures with my phone and of myself - for many hours. 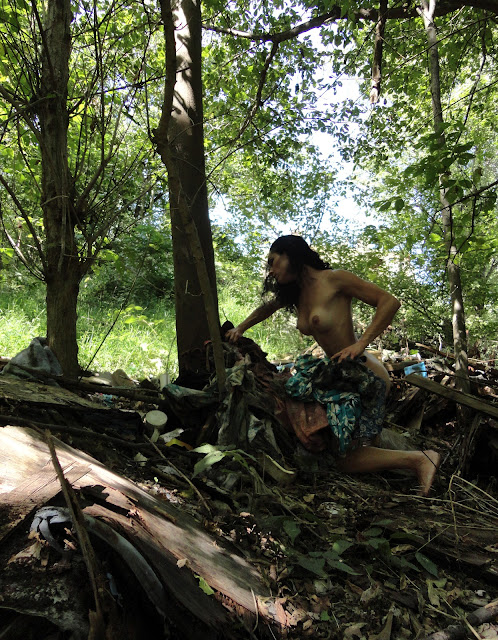 The first time I went there specifically for self-portraits - I began by shooting in the dump site out in a wooded area behind the brick hull, which I had come across on my previous visit. It appeared that most of the inhabitants' belongings had been carried out, and tossed into several heaps, following the fire that had ravaged their home. Among the disintegrating furniture, faded toys, and kitchen essentials - I found a large pile of damp and dirty, decaying clothes that had become fused - not only to the rusted hangers on which they'd once hung, but also to each other - because of a tightly woven network of threadlike plant roots that stitched the garments together. And although the thought of doing so was undeniably macabre, I decided to rummage through, and choose one item from the mildewy pile that would serve as my costume that day. 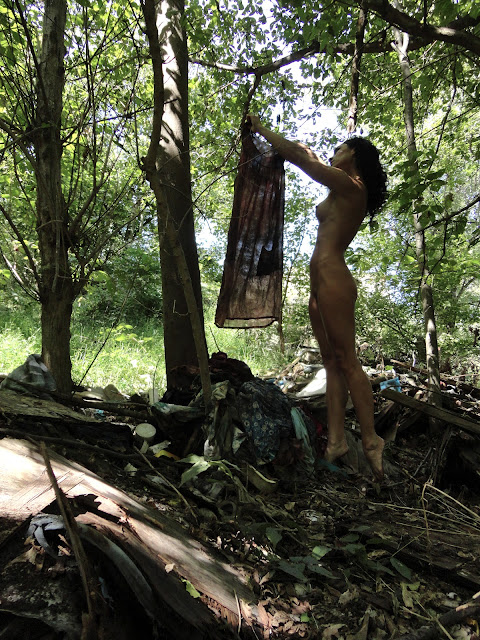 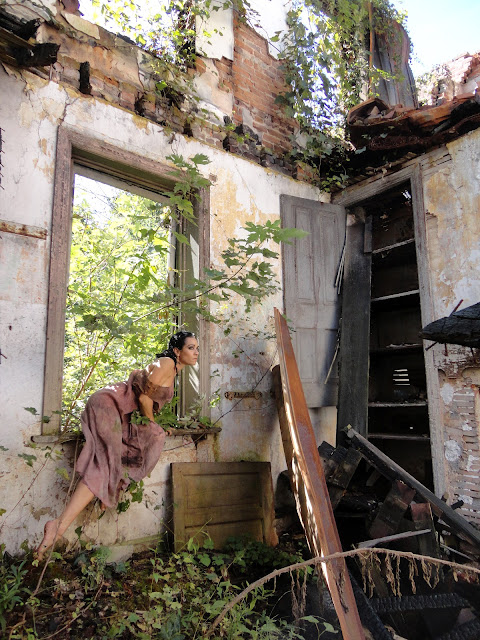 Before staging any pics. in the house's interior, I tentatively tippy-toed ever so gingerly, back and forth across the partially collapsed floor a few times. After which I convinced myself that it would in fact hold my weight, and that I would not fall through the ash and other debris, between the charred floor joists, and down into the cellar below...I then set up my camera, and snapped furiously until I ran out of space on my memory card - which was especially disappointing since there were other rooms in the house, and ideas that I'd hoped to explore. Adding insult to injury (as I mentioned in the last post) - I wasn't all that jazzed about most of the selfpics that had maxed-out the queue on my memory card that day. 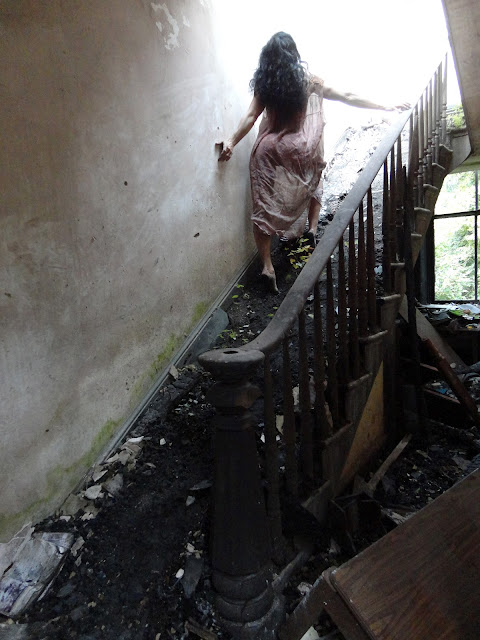 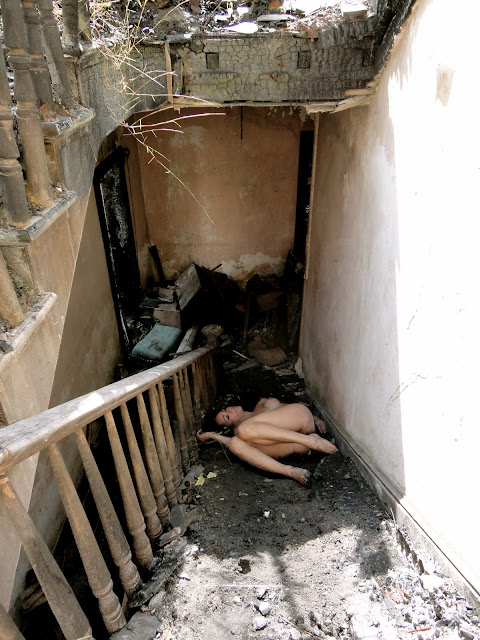 It wasn't a question of whether or not to sneak in a third time, so that I could add more pics. to the first abbreviated sequence of self shots that I'd taken there - it was entirely a question of when... 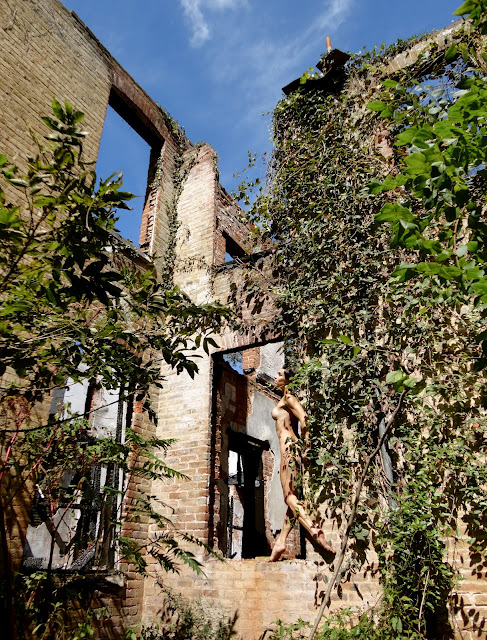 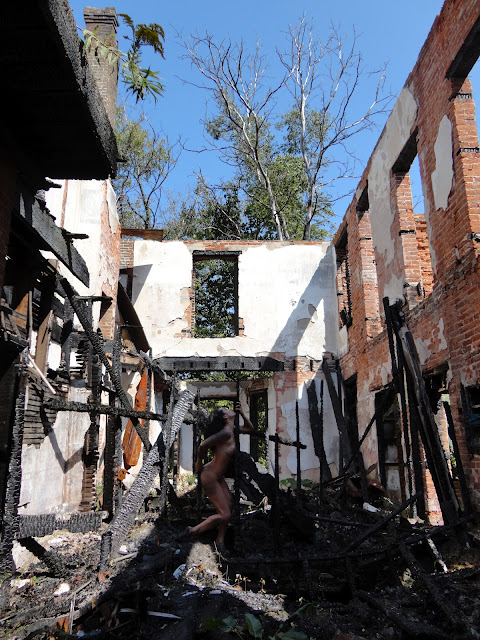 I tend to obsess over the (more) incredible places that I find, and it's not uncommon for me to visit them repeatedly until I finally get them (mostly) outta my system...this ancient, brick skeleton was certainly no exception. Failed first photo shoot aside, I still couldn't wait to be back there once again...but I would have to...because my kids were to be with me for the next three days, and I'd made plans to do another shoot with fine art nude photographer Tyler Keeler, on Monday (which was totally awesome, btw!) 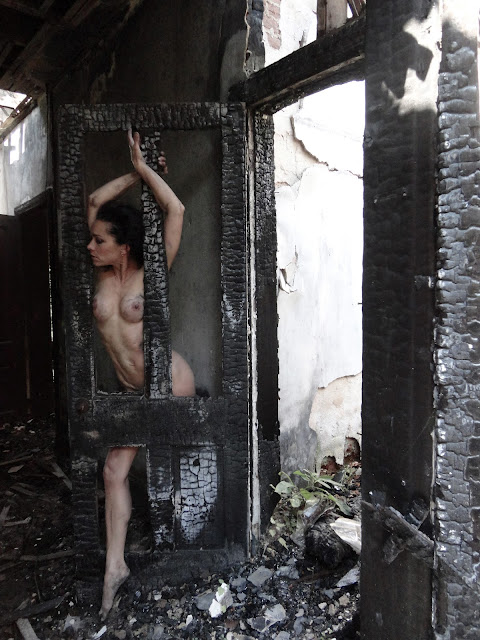 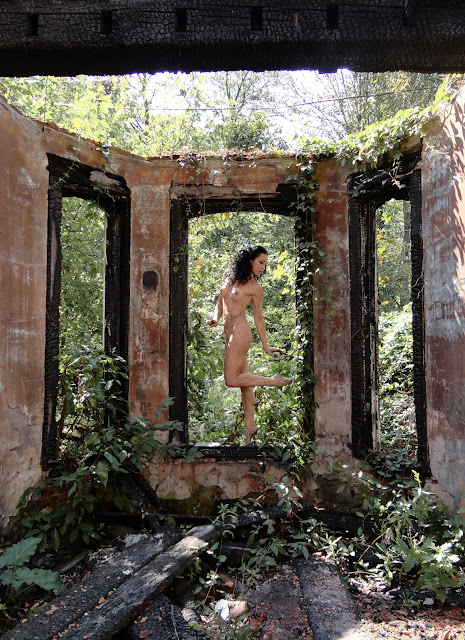 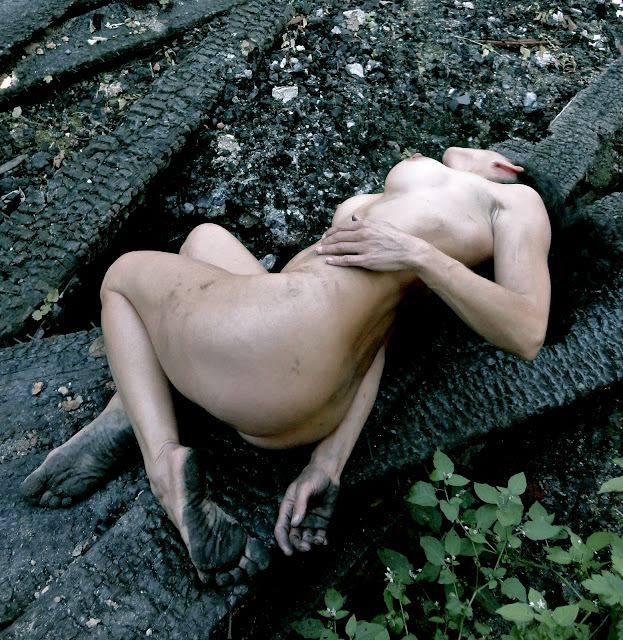 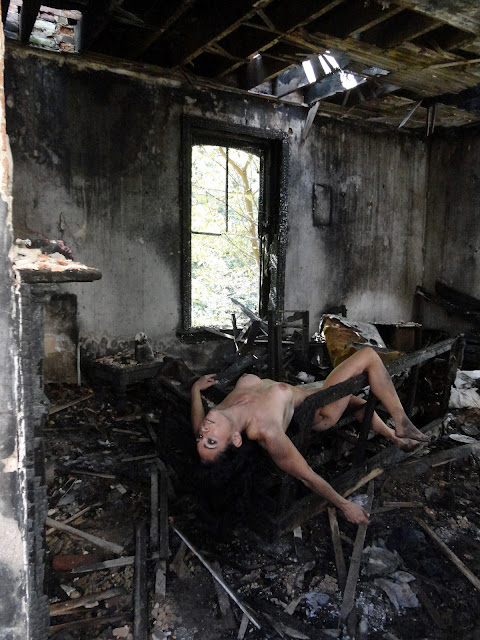 When I went back yesterday, I was better prepared. My memory card was empty, both camera batteries were charged, I'd left earlier in the day so that the sunlight wouldn't be quite as harsh, and I had come up with an agenda that I actually followed. Things went swimmingly well, I must say.

Before I left to walk back to my car - I thanked the old house, and the spirits that (I presume) might still call it home - for allowing me to shoot there without incident or (serious) injury...and more so than ever, I felt deeply grateful for all of the amazing venues that lure me in, and let me make my art there...