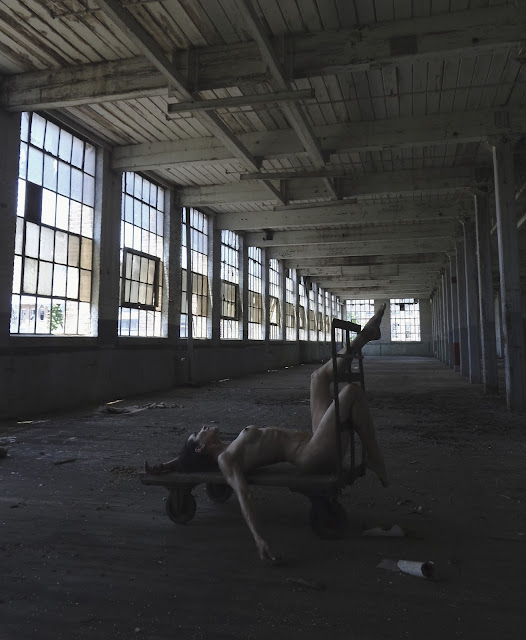 I've been so unbelievably busy putting the finishing touches on my photography gallery, in preparation for its big grand opening this Friday - that I've had no time to update my poor blog, I'm so sorry! But this morning I decided that before I allow myself to dive headlong into yet another insanely hectic day, I must first post a new pic. and entry.

The image above was snapped inside of The Stehli Silk Mill a couple of weekends ago, while I was up in Pa. visiting and working with Osmyn Oree. Osmyn correctly assumed that the sprawling compound of ginormous, old factory buildings would be precisely my cup of tea...and I must say, as soon as I spotted the vast expanse of rooflines, and windows, and a comely, brick smoke stack - peeking up from behind the nearby row houses - I was positively smitten! And the closer I got? The more madly I fell in love with the derelict structures...*sigh*... 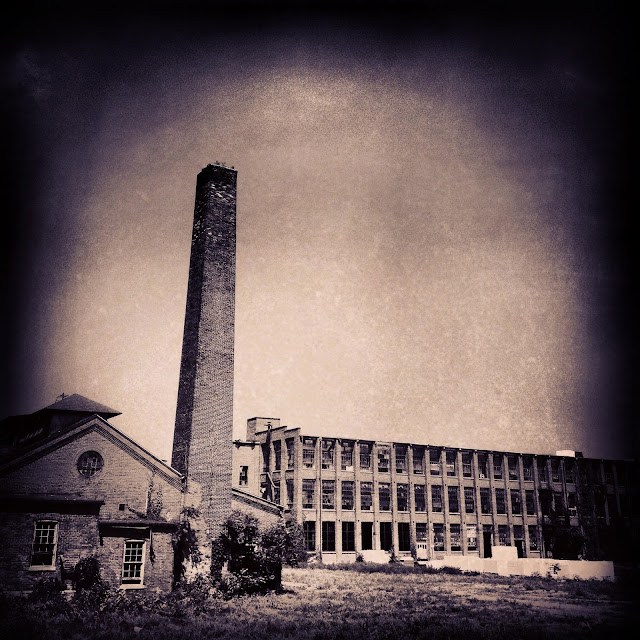 I desperately wished that I could breach the chain link fortress that protected the city block-long property from intruders - but two things kept me from doing so: 1.) there was a roofing crew working on two of the buildings, so the chance of being spotted was pretty likely, and 2.) I'm still on probation for my trespassing convictions, so I was way too chicken to risk getting caught poaching.

I tried sating my burgeoning obsession with the silk mill, by taking pictures of its exterior from outside of the fence, using my iPhone and Minolta XG-1...but it wasn't nearly enough to quell the nagging desire to be shooting inside of the chain link barrier.

The next morning, (while Osmyn was tending to other commitments), I set out with my arsenal of cameras in the hopes that I might distract myself from my disappointment in not being able to document the silk mill in a more up close and personal way - by shooting other interesting subjects that I spotted around town. And it worked! For about a half an hour...after which I found myself being drawn back to the silk mill, it's magnetic pull annihilating my already tenuous willpower.

Just as I had done the day before, I walked along the sidewalk that followed two sides of the perimeter of the first building in the complex, but then I went a little further than I had the day before. I turned a corner and wound up in a parking lot that was situated directly behind the first building, and when I looked up, I saw a man who was working just on the other side of the fence.

Before I had time to talk myself out of it, I walked straight up to the fence and addressed the man. I introduced myself and told him of my passion for photographing old buildings, mentioning that I'd never had the opportunity to shoot anything even remotely as fantastic as the silk mill buildings are - and then I asked him if it would be ok for me to come inside to take pictures of the place, inside and out...and the crazy thing is - he said, "Sure"...AAAAAHHHHH!!! I was absolutely stunned! I never in a million years would've thought that he'd be hep to it, but he was! I thanked him profusely, and dashed towards the construction entrance so that I could get myself inside before he had the chance to change his mind. I honestly couldn't believe the good fortune that had befallen me...I was in absolute paradise...felt like the closest thing to what heaven would be, if it existed.

By the time I'd finally begun to collect myself a bit, I was already deep inside of the bowels of the first weathered building that I'd entered - and at that point I realized that I needed to get in touch with Osmyn, in order to let him know that I'd gotten permission to shoot at the silk mill, and to then urge him to gather his gear, and get himself there - as soon as possible!

Over the course of the 5 hours that I personally spent on the grounds of The Stehli Silk Mill that day, I took an absurd number of pictures with my iPhone and film cameras, staged a respectable amount of new self-portraits, and posed for Osmyn as he went through the 7 rolls of film that he shot with his medium format Hasselblad. Needless to say, by the end of the day I was disgustingly dirty, ridiculously exhausted, but most of all - deliriously happy...

"THANK You!" to the nice man who allowed me to tromp around the silk mill property, snapping so many, many pics.!

...and Thank YOU, Osmyn - for taking me there in the first place! Love Ya', Buddy!