Please Do Not Disturb 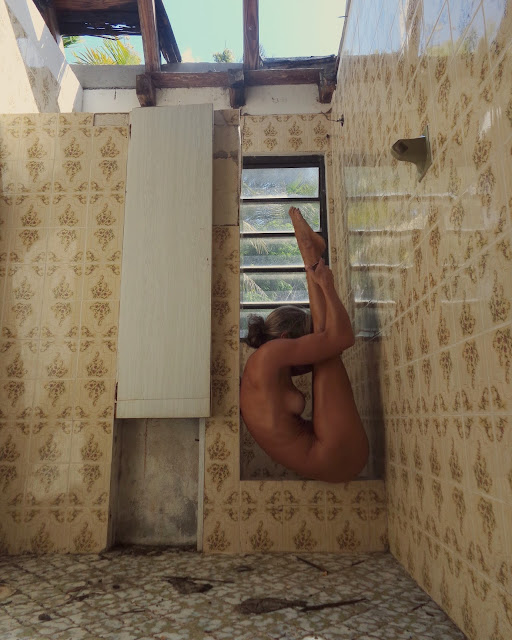 (All pics. snapped on 1/26/16, using a Sony Cybershot, and edited with Instagram filters)


I discovered this abandoned villa a couple of weeks ago, and the very instant that I laid eyes on it - I knew that I'd found the venue in which I would stage my next set of selfpics.

I went back over there today, with the intention of leisurely snapping photo after photo, until all of my camera batteries were spent - having arrived at the location mistakenly believing that I couldn't possibly be interrupted by a single living soul. I mean, it's not exactly like it's hidden away or anything, but it's more that there's so much other, better stuff nearby - that I just couldn't picture anyone suddenly paying any attention to the dissolving structure, making it that much easier for me to get comfortable with the afternoon's plan of indulging my artistic impulses by shooting a heap of nude self-portraits. 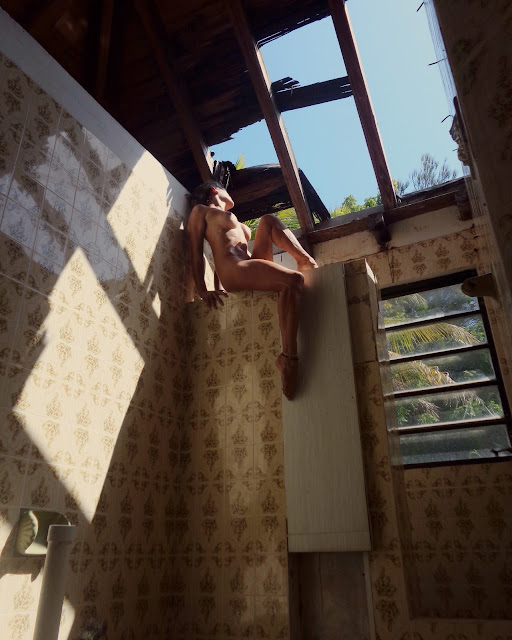 That was not to be the case though, unfortunately…while in about the 7th second of the 4th picture that I snapped on top of the ledge seen above (I was actually standing up and looking through the hole in the roof), I saw a man walking down a path that went along one side of the villa…and I was pretty flippin' sure that he saw me too. I jumped down in a quick, and put on my jeans and t-shirt, and waited for him to come up inside the building. Luckily, he never did.

Once my jitters had died down, I snapped a couple more pics. in the groovy 70's(?) era bathroom, but then decided it might be best if I moved to another area to shoot. 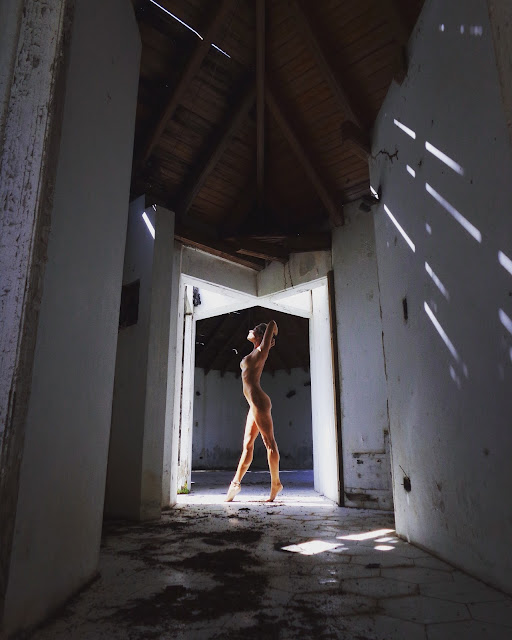 The light pouring into this hallway was superb, so I wasn't all that upset about having to change my focus from shooting in the bathroom - to the villa's entrance…that was until (just after the shutter clicked on this ^, the very first frame) I was dive-bombed by a swarm of jack spaniards, and subsequently stung on my ear lobe, my jaw, and my elbow.

I was like, "Oh, hell no - fuck that shit!" Those suckers are hateful - and I was NAKED!!! So, after only 16 minutes of shooting, and a paltry 15 frames (two of which were test shots taken in my street clothes) - I was outta there.