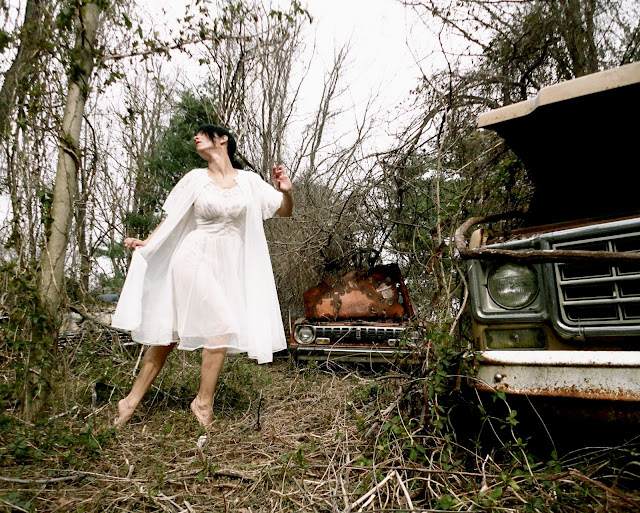 Remember the boy (my son's very close friend) that I wrote about, in February's Outta the Mouths of Babes entry? Well...since that time, back when I took his advice and snapped self-portraits and Instagram pics. at a creepy, old house that he was 100% correct in assuming that I'd love - we've kinda become picture-taking pals. Not only is he an enviably gifted, natural-born photographer, but he's also a delightful person to be around, as well as completely willing - even eager - to join me in my search for cool places to shoot. And I'm talkin' - places that very few 12 year olds that I know, would be willing to even dare set foot...that creepy, old house included.

The boy and I have gotten into the habit lately, of spending hours together - iPhones at the ready (on the weekends when my kids are with their dad) at the flea market, the race track, even a stinky, mucky pig farm. But my very most favorite of all of our destinations - is a sprawling junk car graveyard (seen here in this post), and just as he did with that creepy, old house - the boy clued me into the junkyard's existence. 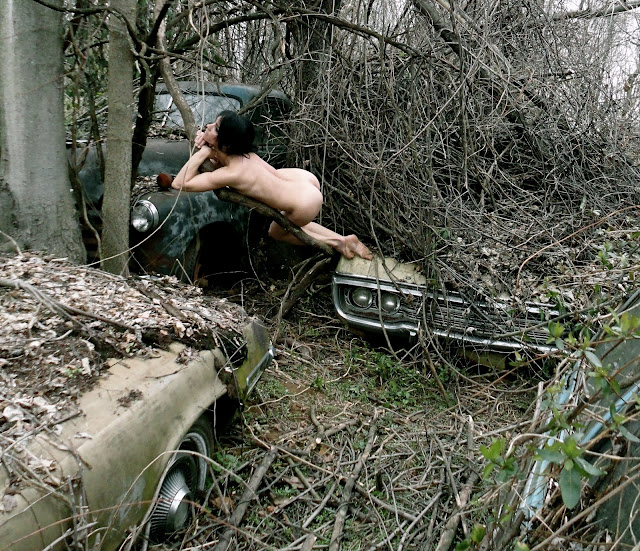 When he first brought it up - I was like, "No way, not possible...I've driven by there a gazillion times, and haven't seen anything like that." But then I thought, "Hmmm...he had been spot-on about that creepy, old house...I may as well go and have a look."

The next day, I called the owner of the business (behind which the junkyard purportedly sits) and got permission to explore the vast, hidden treasure (THANK You!)

Oh my gosh, you guys...when I first walked up to it? I honestly felt like I was dreaming. It was as if I'd stepped into some sort of wonderland...a sea of discarded, antique cars - like a museum and a cemetery rolled into one. I was so mind-boggled, that it actually took me a sec. to remember I was there to snap pics.. But I collected myself, and after a couple of hours, I had more pictures than I knew what to do with...and the best part was - I'd only covered about a third of the property...

I returned the following weekend to pick up where I'd left off, but that time - I brought the boy along with me. There was a selfish side of me that had wanted to keep the junk car graveyard all to myself, a secret spot meant for no one but me and my cameras. But let's face it, I'd have never even known about the place, if the boy hadn't told me about it - so it only seemed fair that I should share it with him.

I typically prefer to fly solo on my outings, which obviously makes sense on my self-portrait shoots, but even when I'm snappin' with my Holga and iPhone, I prefer to work unencumbered by sidekicks. But the boy has proven to be a capable copilot - he's quiet, engaged and he never complains, i.e.: it was pouring down rain at the junkyard that day, and he never once whined about wanting to leave...he was just as thrilled as I was - to be there.

I owe the boy a huge debt of gratitude, not only for directing me to choice locations - but also for allowing me to watch firsthand, the methods that he uses to capture great images. I've learned a lot from observing his casual technique (one that is far less fastidious than mine) as he produces photos that to me clearly indicate that age has no bearing on talent. 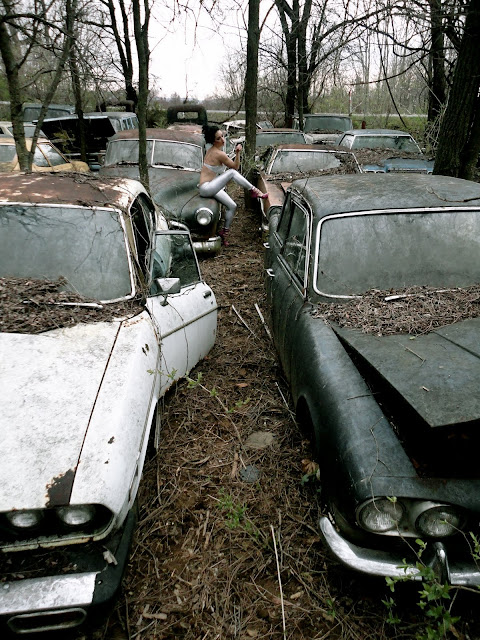 The boy did not join me on my third trip to the junk car graveyard, nor did my iPhone or Holga. Instead, I took only my Cybershot so that I could focus entirely on staging self-portraits. Good timing was of the essence, since Spring was threatening to cause the network of twisted and plentiful vines - to leaf out, and I worried that if I waited until after the foliage was in bloom, I would a.) no longer be able to navigate my way through the already prohibitive under/overgrowth, and b.) my co-stars (the immobilized old cars) would not be nearly as visible. Also, I wanted to shoot on a Sunday - when the neighboring businesses would be closed for the day, giving me the freedom to work with more privacy.

This was one location shoot where I felt completely at ease, and I'm not even really sure why. Yes, I had permission - so trespassing wasn't an issue, and although strangers could see me as they drove along the roadway - I never felt the need to duck or hide. I got so wrapped up in each different scenario - that real life seemed to evaporate, as my fantasies became more real...such a strange thing to say, but it's true.

When I take the time to think about it, I cannot believe how lucky I am...to have a life so rich with amazing opportunities, and an outlet through which to capitalize on them. But even more enriching - are the people in my life - like the boy, the junkyard owner, and a handful of others - who accept me for the way that I am, but also - selflessly see to it (whether they know it or not) that my dreams do indeed become reality…