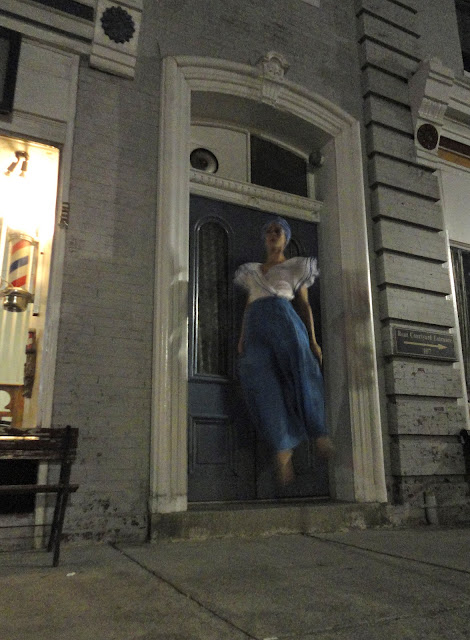 Shortly after I took the picture seen above, I uploaded it to the self-portrait album that I'd created on my (long since deactivated) Facebook account. Not long after that, I was contacted by an old friend who I'd met during my wild party days - back when I was still a young adult living in my hometown of Richmond, Va.. The friend had seen, and liked the image - and was curious to know if I'd be willing to let his band (The New Messengers) use it as the cover art on his their soon-to-be-released single. I was honored as well as positively ecstatic that my photo had been chosen to grace the cover of their upcoming release - and so naturally, I gave them my blessing to use it.

That was in the Autumn of 2010...and after hearing nothing further about the project, I figured that for whatever reason - the band's plans to do the single must've fallen through. Eventually, I forgot about the whole thing altogether.

In early March of this year however, I got an email from my old friend in which he announced that The New Messenger's song, "Beauty and Light" was about to be made available for download off of the band's website, and that they had stuck with their original plan to use my snap for the cover art. Needless to say, I was stoked...still am!

Anyway, sorry that it's taken me so long to share this exciting news with you (in case you haven't noticed - I've been kind of "out there", lately), and also to THANK The New Messengers for featuring my artwork as the visual companion to their new digital track. Best of luck to you guys...and Thank You again!

(please click here to give "Beauty and Light" a listen)

Now, just real quick while I still have you here - there's one other news bulletin that I wanna share, and although it might maybe seem like a bit of a bummer at first, hopefully in the long run it'll be beneficial to The Big Ugly.

Lately, as you know - I've been feeling just a wee bit off kilter...and although the ebb and flow of manic mood-swings has plagued me throughout most of my life (the onset of which is typically an involuntary response to particularly difficult personal calamities), over the last few years they've impacted more than just my day to day demeanor, and the poor souls who get caught in their wake. By now it's no secret that one of the first things to suffer, whenever I wind up in one of my debilitating funks - is my art. Yes, I do on occasion rely on my self-portrait shoots to temporarily lift my spirits when I'm down - but when it's all said and done, and the pictures turn out shitty? I quickly descend into an even darker place...

Last week's shoot (along with a couple of others recently) was a prime example of how turning to self-portraiture as a panacea for my troubles, can sometimes lead to deeper disappointment. That shoot was nothing more than a band-aid that stayed on until I got home and uploaded the pics.. After which the band-aid was essentially ripped off, and whaddya know...on top of my misery over looming personal issues, I had a sorry group of pictures to fret about, as well...yay.

Let's not forget though, that I said "mood-swings"...remember? And just as sure as my emotional pendulum will periodically plummet - inevitably it will pass all the way through those wicked doldrums, and swoop up to a far more pleasant place...and when I awoke wide-eyed at 4 a.m. this morning - it felt as if the pendulum had begun to do just that...completely of its own volition.

I lay there in bed, thinking about a million different things - and amazingly enough, none of it made my stomach hurt - not then...nor has it done so, at anytime throughout this entire day.

I guess the revelation that I had which was most pertinent to The Big Ugly, was this: whether I like it or not - I am definitely stuck in one of those cyclical, artistic slumps - and rather than continue to limp feebly along (as I've been doing) I gotta take a break from self-portraiture for a minute, or for however long it takes me to switch up my strategy and change my approach...while searching for sorely needed inspiration (I also havta get my flipping computer fixed, cuz at the moment? It won't let me upload a single picture from either my camera or my phone)

In my opinion, this actually really is good news - for the blog, my readers and myself...but for those of you out there who may be sorta skeptical - just ask my stomach in its mysteriously settled state...it seems to know more than the rest of us combined…