It may be just as surprising to you guys as it is to me - that after making (what I'm sure may now seem like) empty, idle threats a couple of entries ago, I've already emerged from the departure that I'd planned to take from self-portraiture indefinitely...and am back, and in action, and blogging about a brand spankin' new set of pics....

Coincidentally, the pig farm (seen here in these pics.) was offered to me as a venue in which to stage a shoot - within one or two days of having written that "sabbatical" post...not nearly enough time for me to have made much headway in my efforts to revamp my approach to self-portraiture. Matter of fact, I was so reluctant to dive back into my art prematurely - that I came this close to politely declining the property owner's generous offer to let me shoot there, or at the very least - postponing the shoot, until my head was screwed back on straight.

Luckily however, two deciding factors brought me to my senses, and prompted me to seize this fantastic and rare opportunity. The first one was this: several months ago I petitioned the property owner - "Slim" - to please, please, pretty please let me pose with his pigs...unfortunately though - he said something to the effect of,"Mmmmm? No." But when his girlfriend - "Duffy" (a woman to whom I've grown much closer, recently) revisited the idea sometime late last week, Slim had a startling change of heart. Mentally prepared or not, I knew that it would be terribly foolish of me to not take advantage of this sudden windfall, lest Slim should change his mind down the road. And although I was somewhat concerned that I might be setting myself up to suffer further disillusionment - I reasoned,"Eh, what could be the harm in at least giving it a shot. If the pictures ain't no good? I'll just bury 'em...and forget the shoot ever happened..."

The second deciding factor was - the flowers on the hat that I'm wearing in these pics.. You see, Slim and Duffy were to be attending a fancy shindig, last weekend - and Duffy (style maven that she is) had made the oh-so-chic decision to don Slim's mother's vintage hat to the event...but only after she'd had it beribboned, and bedecked with bobbing feathers, and giant clusters of go-juss, fresh flowers.

After sending me a picture text to show me how fabulously it turned out, both Duffy and I agreed that the elegantly adorned chapeau was not only an ideal statement piece to potentially drive the "piggy" shoot, but might also be the catalyst that would literally set my wheels in motion. Those beautiful flowers would be withered and wilted in a matter of days, which meant there was little time left for me to continue to tarry.

My kids' schedules over the weekend, followed by bad weather on Monday - pushed the shoot out to Tuesday at the soonest. In the meantime though, Duffy did her best to keep the flowers fresh, by storing the hat in her fridge, and I used the extra time to round up a costume, and to actually put some thought into a storyline - something I hadn't done in ages…and it felt really good.

Anyway, so that's why I came out of my mini-semi-retirement earlier than anticipated. And ya' know what? I haven't an ounce of regret for doing so...ya' know why?... 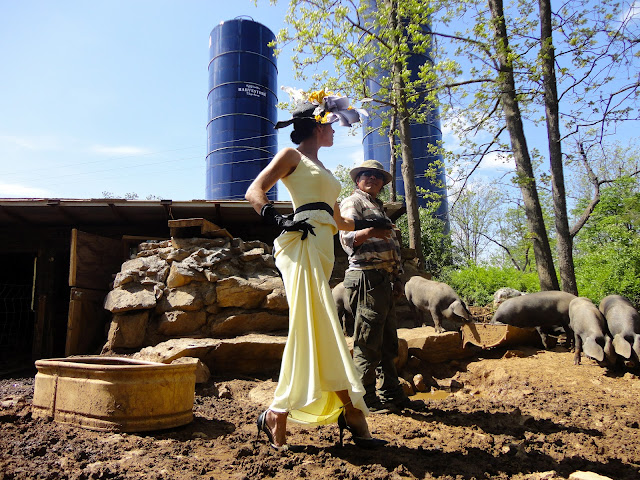 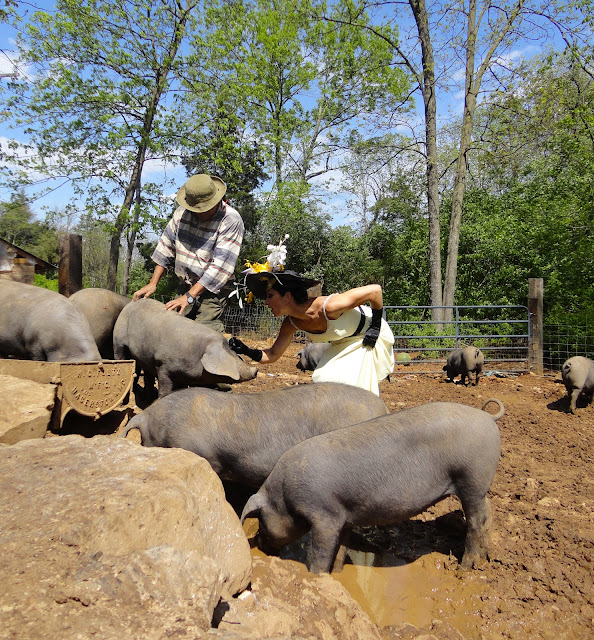 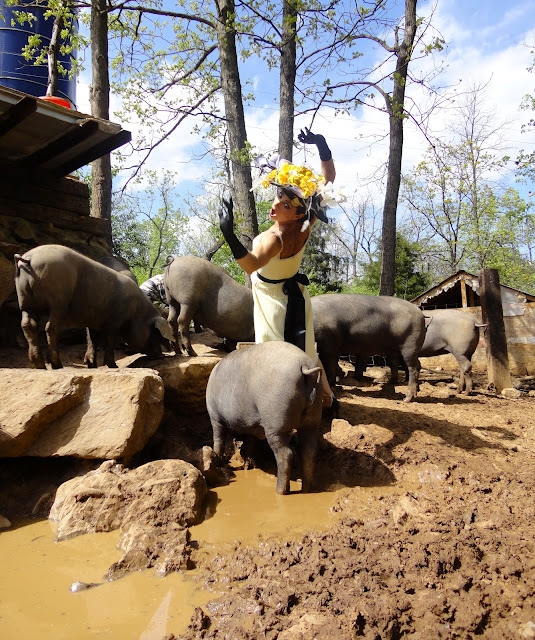 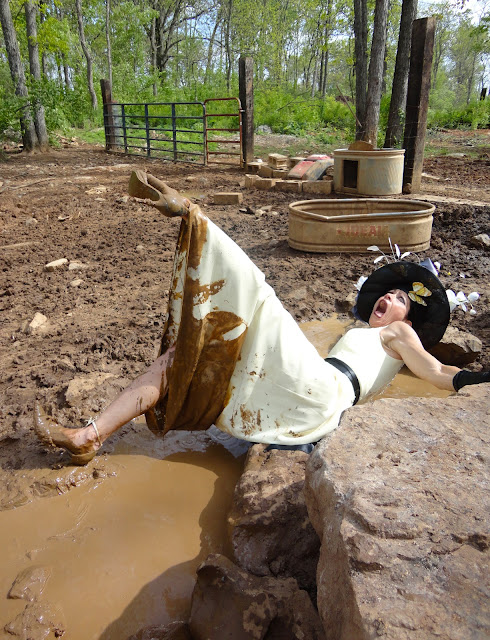 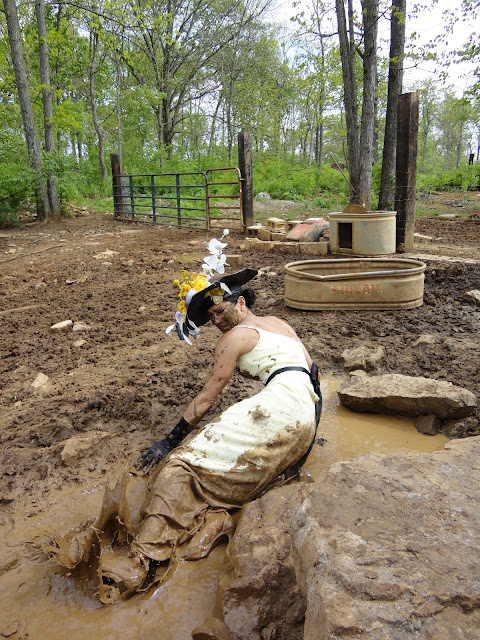 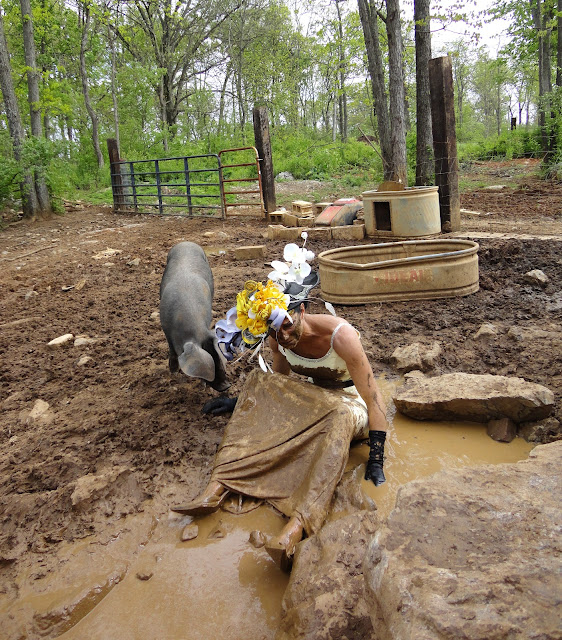 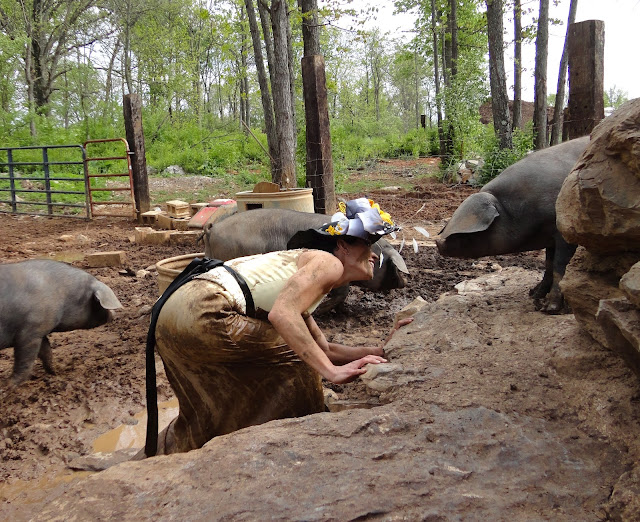 ...Because despite my reservations about being ready to "work" again, and the fact that I left Slim's farm freaking cold, wet, and stinky - I can't remember a shoot that made me feel quite this happy...

Thanks so, SO much to Slim, and Duffy - for giving me so much more than just the opportunity to stage some selfies with the pigs (know what I mean?) And also to the nice man who works on the farm...he was absolutely the reason that this shoot went as well as it did! Y'all the BEST!!!