I kicked off this past weekend, by getting a late start embarking on this - my second trip to my friend Copeland's prefab house in rural central Virginia. Extenuating circumstances kept me stuck at home for hours longer than I'd planned, rather than enjoying what I'd hoped would be - a leisurely 3 1/2 + hour drive, stopping here and there - to snap panoramas and self-portraits along the way.

By the time I actually did hit the road, I was disappointed that most of the journey would now take place in the dark. Not only would my time to take pics. be limited, but also as a rule - I abhor nighttime driving.

Although I left home dressed and ready to photograph myself skulking around a few target locations playing the part of a menacing cat burglar, that never happened. I did however, manage to fire off a few panoramas - so the evening was not a total loss. 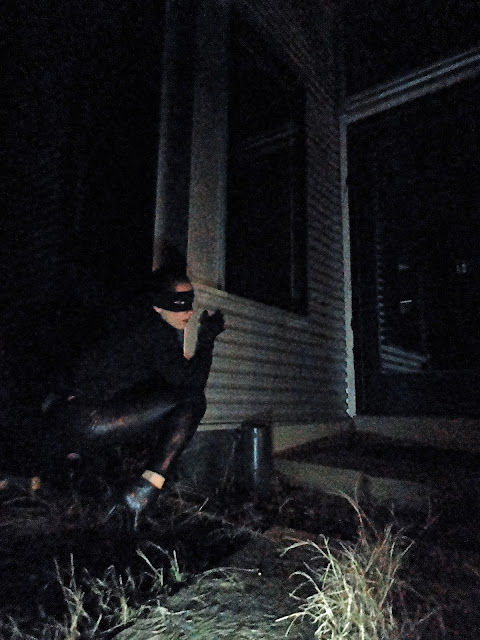 When I finally arrived at Copeland's house, I was frozen to the bone because the heater in my little car bites ass...and I have to confess - I had little faith that I would ever warm up, since I was privy to the fact that the heating system in Copeland's house has yet to be fully installed. But after being hurriedly escorted inside (Copeland is fanATical about letting minimal warm air out) I instantly felt as if a snuggly blankie had been wrapped tightly around me...ahhhhhh...and all I could think was, "Thank god"

Although not yet completed, the off grid house is such a well-constructed, energy-efficient structure - that indoors it was a toasty 69 degrees (I don't even think it had been 69 degrees outside, that day!) This was definitely a good thing in one sense, because I quickly thawed out after my long, cold drive - but unfortunately it made me terribly unmotivated to go back out and put my prowler costume to good use...but I did.

I'm certain that Copie and her family were none too pleased with my selfish whim of shooting a late night B & E sequence while they tried to sleep. It probably woulda been a non-issue had the two very protective family dogs not barked ferociously the whole time that I was shooting - evidently convinced that I truly was an intruder...GOOD dogs! BAD me! (sorry guys!)

I finally tucked my own self in for the night, when my hands got so cold that they burned...and snot ceaselessly dripped from my nose... 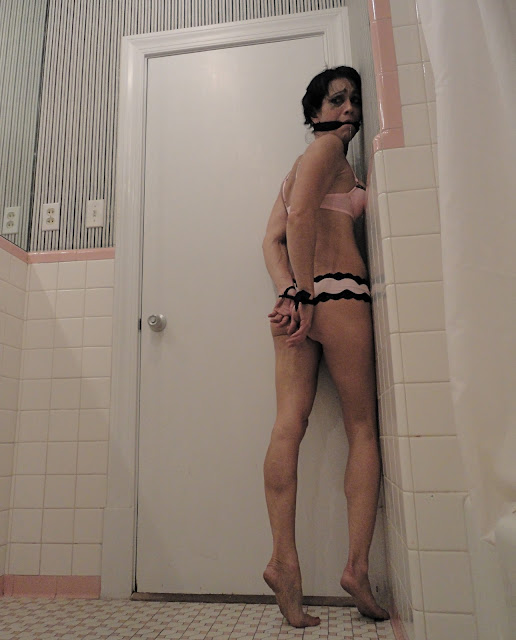 After an insanely industrious Saturday afternoon, I bade Copeland and her family farewell, and left with the key to their city house, where they'd generously offered to let me stay on Saturday night...

As the old saying goes, "When the adults are away, the kids will play"

While driving to Copeland's city house, something occurred to me - her pink and white bathroom would be the perfect complement to my new pink and black bra and undies set  *deg* So...I made a mess of the make-up left over from the day's earlier shoots, before showering and getting spiffy for the Halloween bash I was to attend, and took a buncha pics. a la the one up above! (Clearly I'm warming up to the idea of not always needing to try and look "pretty" in my pics.)

Immediately after seeing just one of the images - Copeland fussed that I'd be allowed no more unsupervised overnights at her house (spoil sport) after which she sighed, "I'll never look at my bathroom the same way again"...AH-hahaha! Yeah right...you and I both know that she secretly loved the pics that I'd snapped in there.

I arrived at the Halloween shindig as Little Red Riding Hood and after less than an hour, was approached by a brawny and sloppy drunk - "Donald Trump". I was standing with my legs up against a low table and at one point when the unsteady D. T. suddenly lurched towards me, I lost my balance and fell backwards onto the table...as well as onto a glass candle votive...which broke and cut my ass cheek wide open...Mr. Trump? I'm sorry, but you're FIRED! 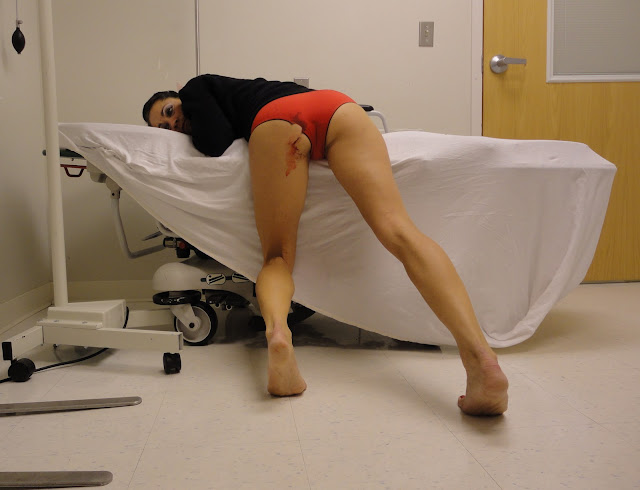 I can't believe that I spaced on photographing myself wearing my new and improved Red Riding Hood suit (what a dunce) but at least I had the wherewithal to snap a few pics. of my shredded butt (before and after the stitches) while I was stuck celebrating Halloween in the ER...

...and that my dear friends, is the beginning and the end of a weekend that I will not soon forget...no need to worry though, the middle is nipping at their heels...