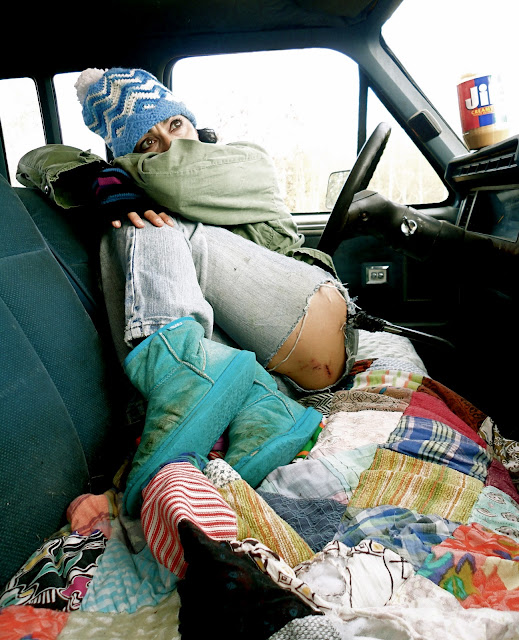 
After scrolling through the pics. that I chose for this post (plucked from five consecutive, recent photo shoots) I hated that what immediately came to mind was, "Dear god, have I plateau-ed? Or, perish the thought - regressed?!" And as I considered my bleak first impression, the notion that on some level any number of my self-portraits could be considered obvious and/or banal - sent me into a full-on tailspin. It sucks because now I've got myself all in a tizz, worried that no matter what I try or have tried - there's some probability that the end product could come across as corny or cliche...

I'm gonna chalk up this discomforting epiphany - as a necessary part of the learning curve, K? And rather than bury these photos and pretend that the problem doesn't exist, I shall instead tackle the issue head-on. (Here's hoping in the process, I'll be more cognizant of what to watch out for when conceiving and staging future shoots)

Outside of the minimal feedback that I get from my viewers, I have no idea what most people think or even feel when they look at my pictures. Compounding that - is the fact that I don't deliberately try to manifest anything specific in my pics.. I just decide on the costume and the venue...and when I get there (more often than not) I do my best to look pretty when I pose. Other than that - I kinda throw caution to the wind, and if I'm lucky something cool happens - completely by accident.

Most times I select the pics. that I post in the blog, based on basic things like compositional aesthetics or the desire to gloat about my more physically difficult accomplishments. I don't usually find myself digging much deeper than that. (Am I an idiot to actually admit this? Maybe)

Let's take the first picture in this post. Why did I pluck it from the rest of the bunch. Simply because my whole body and the jar of JIF were totally in frame, the contrast was decent and my new battle wound was clearly visible...now I'm here to tell ya' -that's some pretty deep shit.

I asked my son if he thought that I looked convincingly like a squatter? He said, "Um, yeah sort of......I guess" I responded with, "Really? Hmmmm...Where do ya' think I went wrong?" His succinct yet sage assessment put it all in perspective and made me officially loathe the damn photo, "You're wearing make-up, Mom"...true, true...'nuff said... 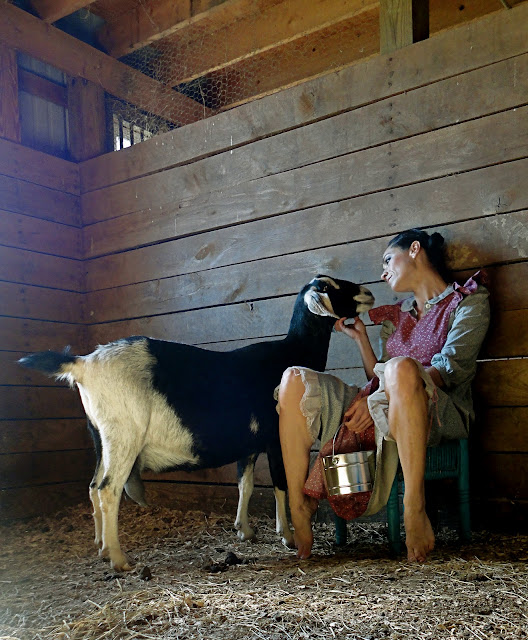 
The next four photos were snapped all in one day, and in roughly the same location (two neighboring farms belonging to friends)

I'd already made arrangements to shoot with the bull and the old truck, but when the goat thing came to me last minute (always one to be economical with my time) I called my friend to see if it would be ok to add "milking the goat" to the docket...and it was (Thank you, T.!)

I justified doing this my second milkmaid shoot - by telling myself, "That last shoot was primarily about the barn. This one is all about the animal." Seemed foolish to pass up an opportunity for fear of being redundant, especially since I'd scored that way-too-small-for-me country gal outfit at the thrift store, just a few days before...


I took some pictures pretending to milk ole Glory - and she was perfect. Plus the lighting in the milking stall was divine! But ultimately it was I who fell flat. Every photo just looked so contrived (way worse than the picture above, believe it or not)

I coaxed Glory into her stall with a bucket of grain, and I think we did a little better messin' around in there, although in exchange for posing for my pics., she insisted that I sacrifice my straw stool to her epicurean cravings. She's a GOAT, for cryin' out loud - lord knows those suckers'll eat ANYthing! 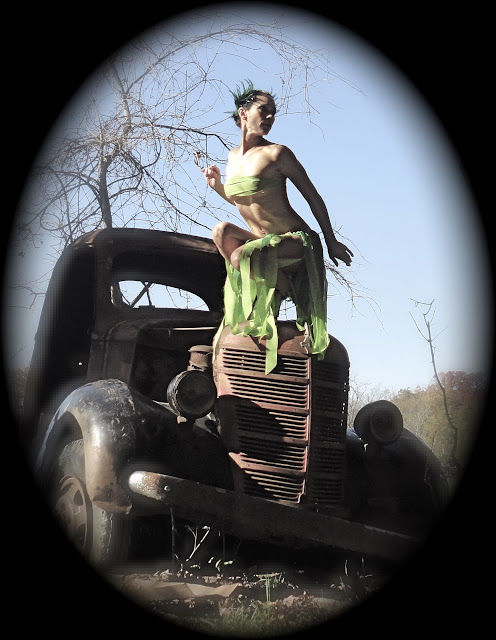 
Next stop was where a 1940's International truck had sat paralyzed for years, after its driver broke the axle and left it for dead. I had not seen the truck before the day that I photographed myself with it, but going on the landowner's description of its condition and whereabouts - I fashioned the wood nymph costume believing it would somehow coalesce with the skeleton of that truck - forever stuck on the limestone outcropping...

In slogging through the hundred or so pictures from on and around that remarkable relic, my overall interpretation of them was that they were cheesy...such a pity.

And while desperately trying to salvage the best (overstatement?) of the lot - I resorted to experimenting with unfamiliar effects on iPhoto (see above). It was a last ditch effort to overcome critical background snafu's...the results? Storybook sappy...two thumbs down.

I posted this one so you wouldn't think that I'd completely lost my marbles...and it may be a teensy bit better. But still - to me? It's hackneyed and nothing really jibes... 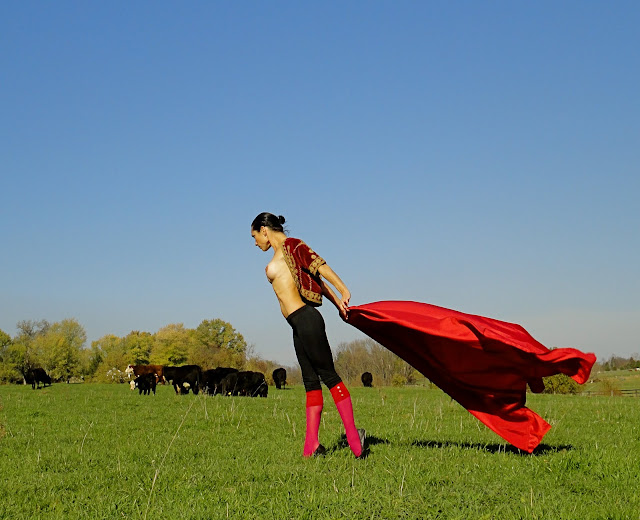 
My aspirations to play matador with my friend's prize 2000 lb. bull - were dashed when the bull continuously eluded me and my camera. I musta walked four miles chasing the bastard around that field, but anytime I got close enough to set up my equipment, he aloofly lumbered away with his bevy of babes...grrrr...

I can admit, that I did come to this shoot, knowing full-well how utterly ludicrous the whole concept was. I mean, for one thing the bull has no horns...although I had no sword, so in a way we'd have been well-matched opponents. Also there was no arena or audience - the very idea of a mock bullfight was balderdash. In the end though, none of that mattered - since the bull refused to cooperate with my far-fetched theatrics. But I was there, I liked my costume and I wasn't quite ready to retire it...and the wind did nice things to my makeshift cape :)

The photos from this series bring to my mind, an escaped mental patient...roaming the countryside...stalking indifferent cattle - in an attempt to satiate delusions of (female) matador-esque grandeur. Plain weird.

(I wasn't unhappy with the colors though, so there is that) 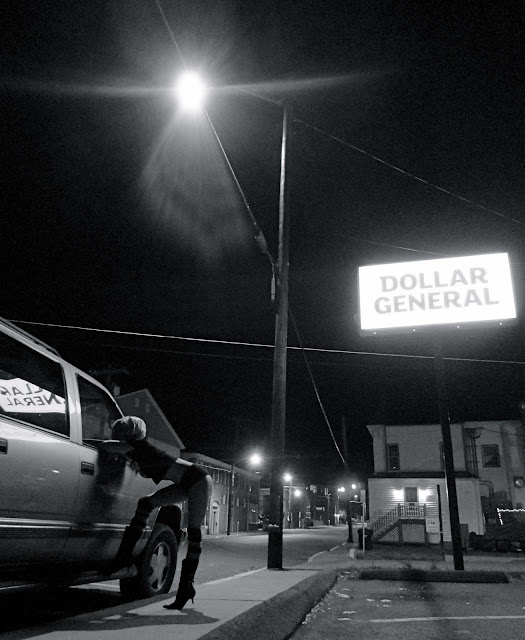 
A hooker shoot? Shocking. It's almost like, "You're only just now getting to this?"

Thing is - this is a second try at this particular theme, very different from my first attempt but no more innovative. I did enjoy going out in the middle of the night (thank you H. for loaning me the wig, btdubs) and I liked that cars (even cops!) drove by and didn't mess with me one tiny bit. But I'm still not quite sure how I feel about these photos. My mind right now is so fixed on believing everything I do is unoriginal, and because of that I've temporarily lost my point of reference...I'll get it back though, I promise. I just have to keep reminding myself that this whole thing is a crap-shoot...no matter what I do or how I interpret it...