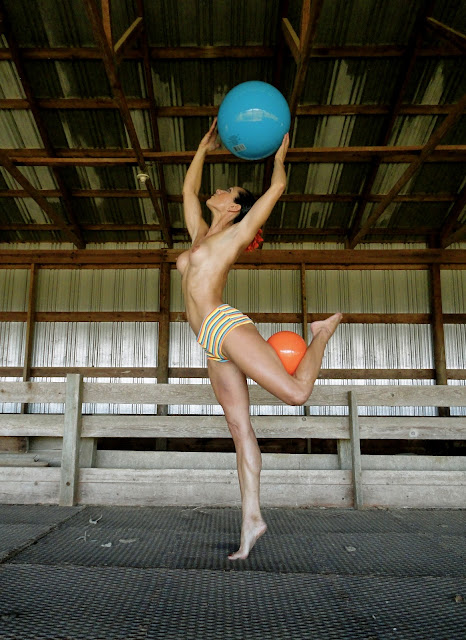 Consider this odd assortment of pics., a self-portrait casserole if you will...with each individual image acting as one of the different ingredients. Now...whether it actually sates the appetite or not? I leave that up to you to decide...

For a couple of weeks there, I was on this sort of self-portrait snappin' spree - but rather than spending much time on any one specific topic, I frenetically jumped from theme to theme (think - Adult ADHD on steroids). I staged at least a few of these shoots (the one seen above, for example) armed with props and costumes, and a very clear vision of how I wanted to look in the pics. - but I'd neglected to plan for much else beyond that. What I realized early on was that I'd be lucky if any one of these sessions wound up to be so much as a one hit wonder, and that attempting to churn out an entire story from such lackluster sets - would be like trying to squeeze blood from a turnip.

Time after time, I abruptly abandoned each shoot - and greedily moved on to the next. 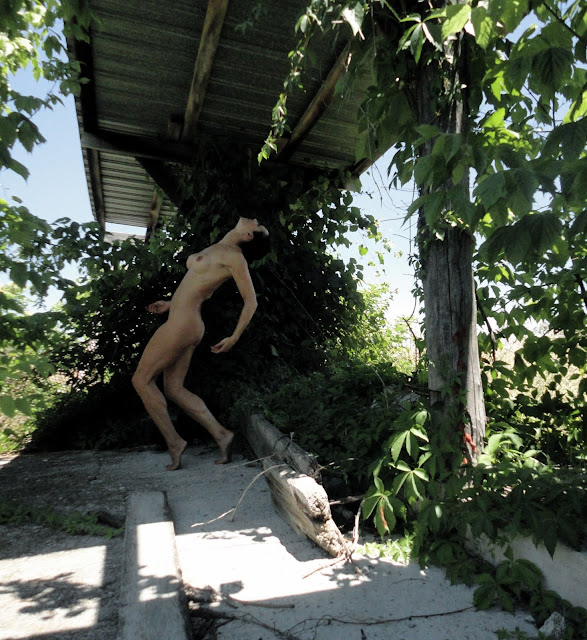 Part of the problem with the pictures that I shot on 6/29/11 - was the venue where I took them all. Over the 3 1/2 hours that I flitted about my friends' fantastic farm - it felt like my eyes were bigger than my plate. I'd devote a few minutes to one idea, and then turn to see what I thought could be an even better setting in which to pose. I repeatedly explored one fruitless theme after another, in the hopes of producing something, anything - that might not seem quite so pointless... 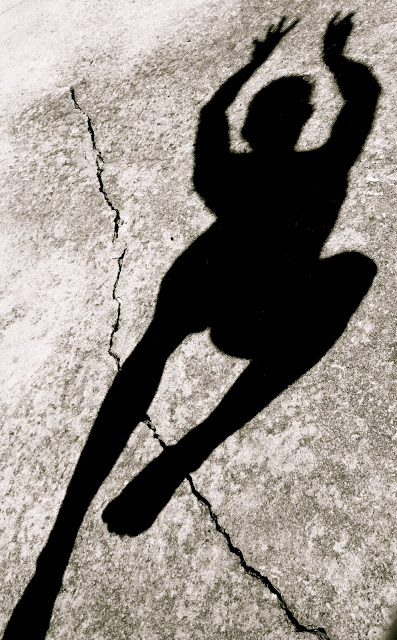 ...but instead of gaining any ground at all, I consistently took giant leaps back. 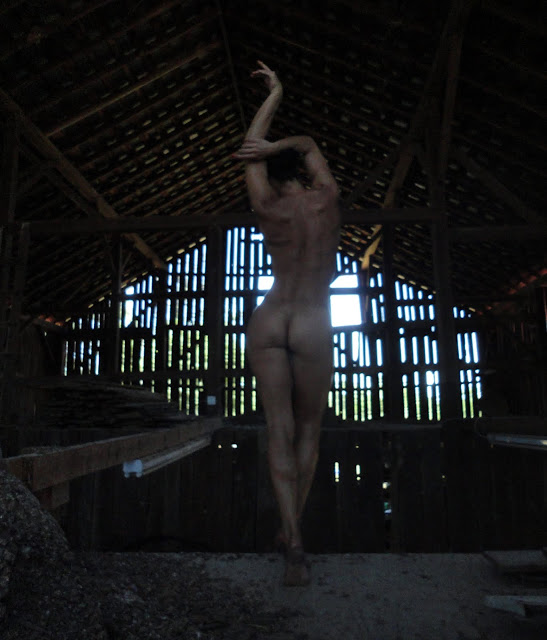 Although the delectable contrast of shadow and filtered light lured me up into the hayloft - I was somewhat reluctant to shoot there. It's not exactly like I have a shortage of pics. of this nature, plus standing that close to the edge and looking the however many feet down to the concrete floor below - triggered a near paralyzing onset of vertigo...*gulp*

I talked myself into going through with it though, and like a junkie trying desperately to finally get my fix - I ravenously snapped as many pictures as I could, until my camera battery died and effectively put an end to the madness. All I had wanted was to walk away with one measly stand-out pic., so that the day wouldn't have felt like a complete waste of time. But what I got was yet another string of dreadfully homogenous snaps - poorly-lit, and uninteresting, to make matters that much worse.

(Although I have little to show for my time spent shooting on their farm - I still have to Thank my dear friends for being amenable to letting me at least take a stab at it!) 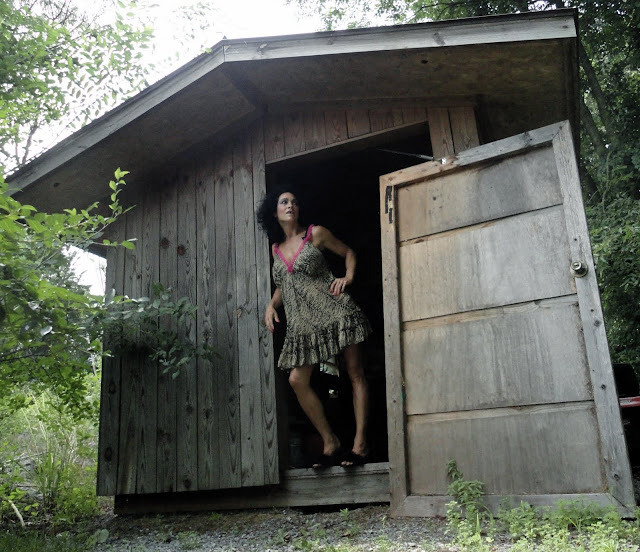 I had an "About Face" shoot in mind, the day I blackened my tooth, stuffed a gargantuan thrift store bra with 6 pairs of rolled-up knee socks and wore a size 11 neglige over top. The outfit cracked me up though, and so I couldn't resist taking a few body shots just for kicks.

The premise of these pics. was to test myself...to see if I was brave enough to put "pretty" aside, and post hideously unflattering face shots on my blog. I'm ashamed to say that for once, I lost my nerve...

Two days after I got such a hoot outta taking these pics., Anonymous' "Butterface comment thrust me into a state of discombobulation. I was well aware that publishing any close-ups from this bunch, would make me vulnerable to sustaining further ridicule...and I decided to can the whole idea. 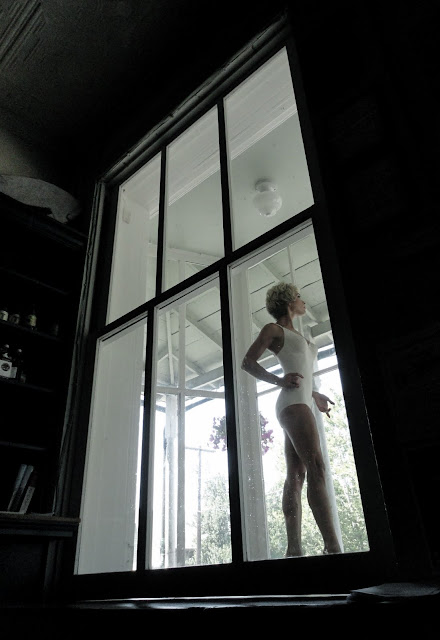 
"This really shouldn't be so difficult" is the phrase that ran through my mind on a continuous loop, as I reviewed each of the 44 images that preceded this - the very last one. After struggling for so long to fit my whole self (minus my feet, of course) into that one window pane, having barely deviated from striking the same...exact...pose...every...single...time - I was beyond bored, my patience had worn thin, and the gig was officially up.

(But hey - Thanks once again, to the local gourmet grocery - for not only allowing me to shoot there for the third time! But for also for offering their display window as a backdrop...I really do love you guys!) 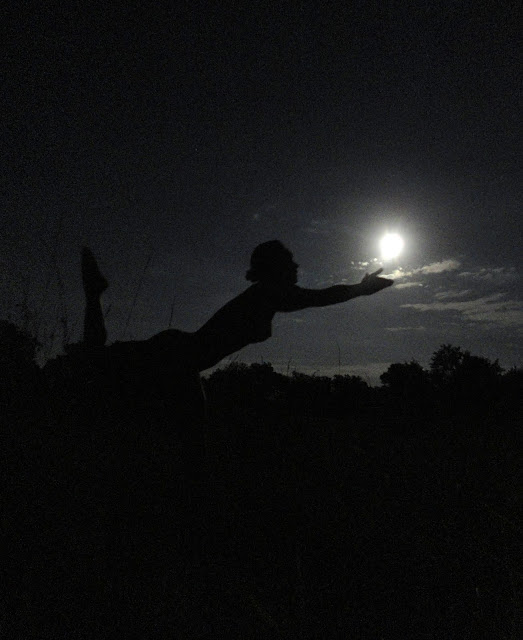 I have a pen-pal to thank for inspiring me to get up off my duff and take advantage of this weekend's full moon. I knew it was there, and even remarked to my son about its beauty - but it wasn't until I answered, "No" - when my new friend asked if I was gonna do a moonlit shoot, that I realized if I didn't - I'd miss out on a prime opportunity.

Never underestimate the difficulty of shooting in the dark night without a flash...oh my. I already had my work cut out for me with just trying to "catch the moon" in my hand, but to add - holding my poses perfectly still - into the mix, made for a ridiculously challenging task.

My miserable success rate perpetuated itself with the "moon" pics., cuz out of 80 earnest attempts - 77 were abysmal misfires...grrrrrrrr...

I look at this bizarre collection of self-portraits, all snapped over such a short period of time and wonder, "Good god! Am I schizzo or what?!" But instead of psychoanalyzing myself, I shall blame this unusual phase on an inexplicably voracious hunger that came on rather suddenly, outta nowhere - and that I felt the compulsion to satisfy.