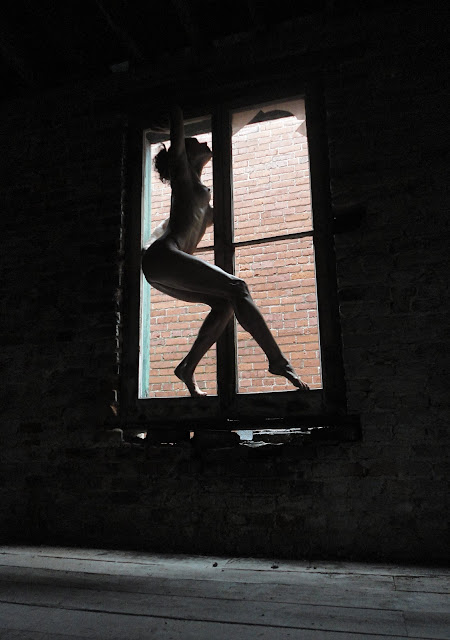 Although in the not-so-distant past, it was nothing for me to stage back-to-back photo shoots (three or even more in the same day, on occasion), lately I'm so busy with work and other things - that I feel fortunate to wind up with a single batch of new pics. per week. Riding the wave of my little Labor Day free-for-all however, along with the fact that I had the following day off of work also - I was totally jazzed about spending a rare, second day in a row - somewhere, anywhere - in front of and behind my trusty camera... 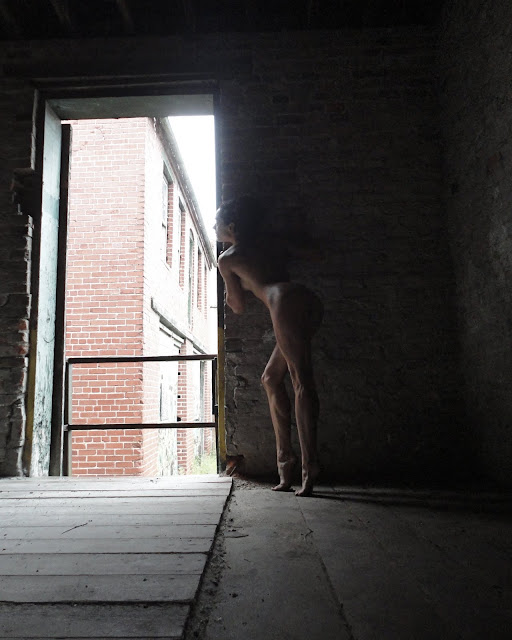 I have no idea why shooting at the venue that I chose - hit me. But it did. Ya' see, there was this day late last winter, when I strolled around downtown taking Instagram pics. with my phone, and at some point I came upon a vacant property on which stood the most incredible assemblage of antiquated warehouses - their rich patina so irresistible to me, that I knew I just had to find a way to breach the tall, solidly-constructed, seemingly impervious board fence that fortified the property, and (presumably) protected it from intruders. Luckily, I found a spot in the imposing barrier, where two boards had been conveniently removed, creating a small space just big enough for me to barely squeeze through. 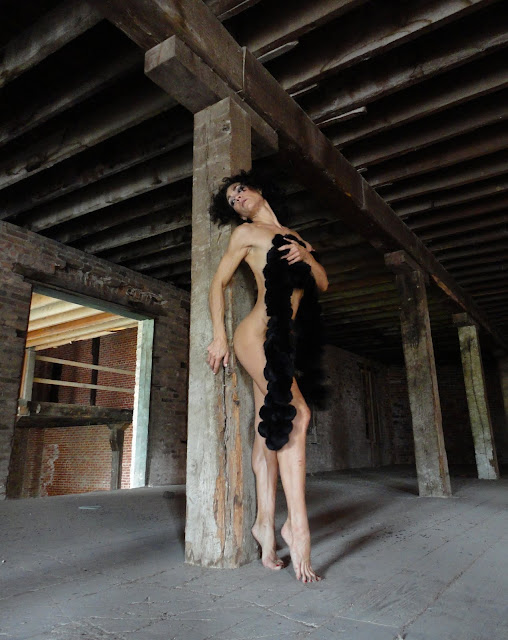 Once inside and exploring the grounds and buildings, I was happier'n a pig wallerin' in shit. There was just so much awesomeness to see and to snap, and so I stayed and took pictures until I absolutely had to leave...so that I'd be at school in time to pick my kids up at dismissal. 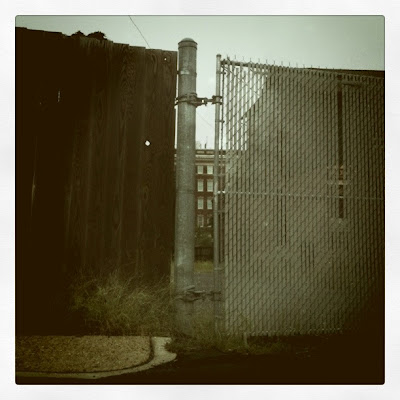 I haven't really thought about that place very much since then, but for whatever reason - it popped into my head last Tuesday, literally the instant I began brainstorming where to stage some new pics..

The weather that day was atrocious, which was really of no consequence - since my plan was to shoot under cover and out of the pouring rain, as well as more discreetly - inside of the buildings. I drove into town, parked my car around the corner from the conglomerate of crusty structures, and walked to where I remembered slipping through the crack in the fence the first time. But this time, there were two brand new boards where the crack used to be. "Damn", I thought..."now what do I do". Without breaking stride, I continued to walk the perimeter of the property - but paused when I noticed a gap where the fence met the chain-link gates (see above). It looked pretty tight, and turned out that it was - my butt fit ok, but I couldn't smash my left boob down enough to slip the top part of me through...*pffffft*

So. I trudged on through the rain, the rest of the way around the entire property - looking for something that I could possibly sneak over, or under, or through...but found no such place via which to gain entry. I decided to go back to that gap by the gates, where I next tried sliding one boob through - by itself first, and then the rest of me (and my bulky backpack) around the pole until I was all the way inside of the fence. I panicked for a second, when it felt like I might actually be stuck - but I squoze while I pushed really hard one...last...time, and just like that - bloop - I was in...Giddyup! 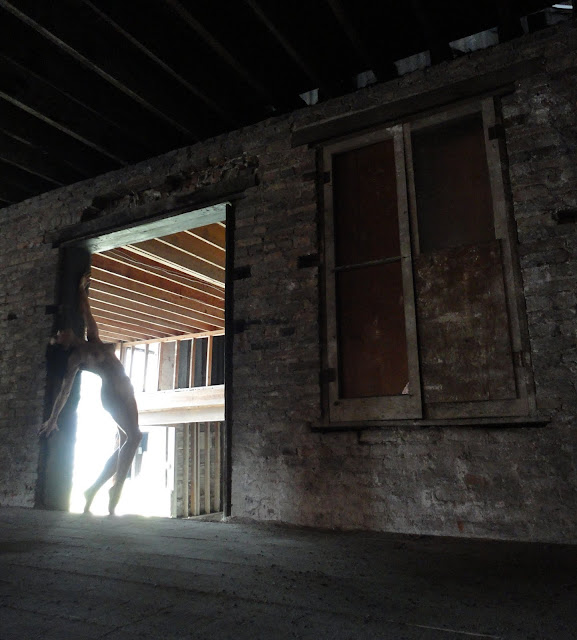 The space was outstanding - overwhelming, in fact. There were almost too many options to consider...and although that is undeniably a good problem to have - I still milled around aimlessly, for the first ten minutes - marveling over my stellar surroundings, and having made the snap decision to go there. Eventually though, my awe morphed into lucidity (thank god) at which time I set up my camera, got naked and posed.

After spending an hour and fifteen minutes shooting inside of the same structure, I hopped down through the large opening (seen in the image above), and placed myself up against the corrugated, galvanized wall (seen below) that reflected and magnified the odd, rainy-day light. At this point, although there was a roof over my head, there was no wall out in front of where I'd set up my shots...soooo...in essence - I was outside...which primarily meant - potentially visible to folks who might glance out of the upper floor apartments across the way, aaand spot me...trespassing, naked and actin' a fool.

In the end though, I abruptly called it quits for a completely different reason. A train engine had come slowly rolling down the tracks (which are juuust on the other side of that high board fence that I mentioned) and came to rest at the tiny station nearby, giving the engineer a clear line of sight into my shoot.

I got dressed and packed my gear in a furious hurry, smooshed myself (once again) through the gap by the gate, walked briskly back to my car, and left for home still feeling sorta hungry for that place. 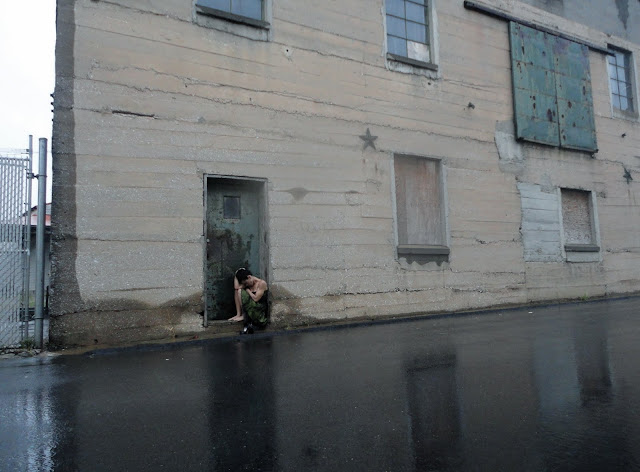 I returned to take some more pics., later that evening while it really rained (this time though, I was clothed, and posing out in front of a building on the opposite side of the street)...mostly because I felt like I'd only just started warming up, when that train so rudely pulled up to the station and cut my derned shoot short...

Even now, I keep thinking of all of the things that I wish I would've done while I was at that remarkable place, earlier that day...and with so many ideas swirling around in my brain, I don't think it's completely out of the question to think that I will indeed go back there - encore, une fois...