It's so rare that I go out to party anymore, but twice in one weekend? Impossible... 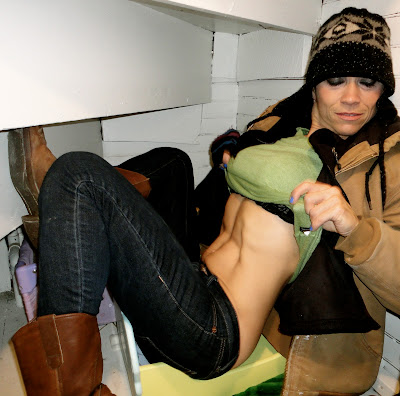 Those of you who so graciously followed my old Big Ugly Blog may still envision me to be the tireless gadabout that I once was...spending every childless moment drunk and stupid - bar-hopping with friends, or hustling one disastrous sexual escapade after another. For two straight years I willingly (and diligently) sacrificed whatever dignity I (ever even) had (to begin with), my main objective - to raise eyebrows with each successive, more scathing or self-incriminating post.

My socializing halted abruptly and completely, the instant I fell in love with dash photography. It's become such an all-consuming hobby(?) that I simply don't have time to play anymore. Going to parties and bars with friends or out on dates with random guys - takes too much time away from snapping pics....and editing pics....and writing about my pics. in my blog. I literally have not taken a whole entire day off from this stuff, since I became so obsessed...what - like 4 months ago? If it weren't for leaving my home to go out and do the derned shoots, I'd have become a full-blown recluse by now.

And I know it may sound strange, but this thing that I do requires an enormous amount of quiet time...absolute silence and total isolation from the rest of the world doing nothing (sometimes) but thinking, that's it...about where to shoot next, and who to portray and what the character should wear, and how or where to collect critical props or the essential elements for each ensemble. I honestly can't even listen to music anymore (and I'm an avid music-lover) since I'm incapable of staying focused on whatever task is at hand, whilst singing along to "Meat is Murder"...

Leading up to the days or nights (or full weekends!) when I leave my house, not to return until multiple consecutive shoots have been executed - there is a considerable amount of planning involved with making sure that I'm prepared for each shoot, and as a result - I've become moderately to extremely OCD about being certain that I'm organized before venturing out.

Last weekend however, I made a brilliant discovery: a photo shoot doesn't have to be mapped out to the letter, in order for it to be even marginally gratifying. Case in point - the spur of the moment hotel shoot detailed frame by frame in my last blog entry...I'll admit - the photos weren't remarkable in quality or content - but they taught me that I am capable of being spontaneous, as did the photos that I took the following night... 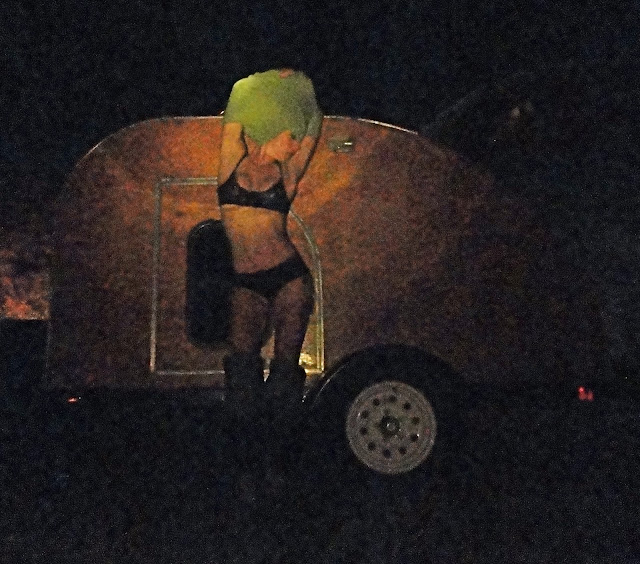 
I went to the big party up the road from my house, with my camera on my person as usual, but with no preconceived notions about what shoot(s) might arise. Although having learned my lesson the night before, about always being somewhat prepared costume-wise - I broke tradition and wore undies (underneath of skinny jeans, no less? Just awful!) along with a matching(ish) black, lacy bra. That way I knew that I'd be covered (so to speak) should an irresistible opportunity present itself...which predictably (or luckily) - it did.

After walking from my car, through what felt like acres of cow pasture, past hundreds of cars and then down a long, lovely lane lined with dozens and dozens of Ball jars illuminated with tiny white candles (spectacular!) - I finally arrived at the party, where I claimed a spot amid the throngs of party people who were warming themselves by the bonfire...I had probably been there for all of maybe 30 seconds, when I looked to my left and noticed the most adorable, mini camper nestled cozily and close to the tree line. Right away the thought of shooting in front of it became firmly fixed in my feeble brain.

As soon as I got permission from the hosts to have at it, I began psyching myself up to disrobe in front of any number of the hundreds of guests who might happen to glance over and see me. After mustering the courage to go for it - I carried my stuff over to the camper but once there - I decided to shoot on the opposite side - putting the camper between me and the folks by the campfire. I know, kinda lame...but I was NERVOUS! 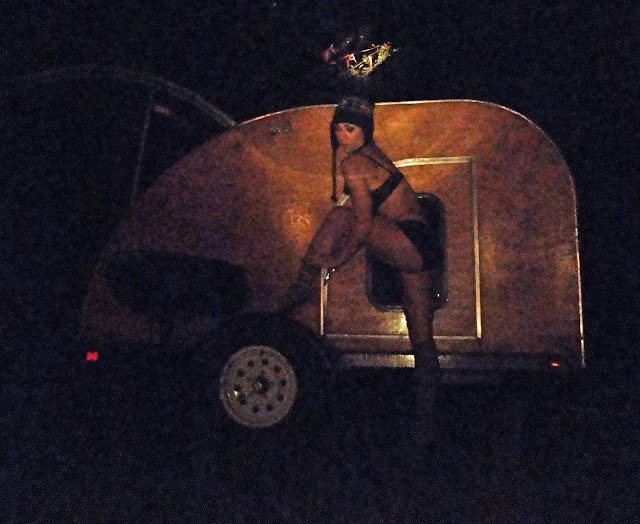 I thawed out by the fire for a spell, downed another voddy cocktail (or several) after which I decided to go back to the camper to take a second set of pics. - this time - in plain view of the poor, confused souls who were powerless to miss my shenanigans. I was proud of myself for removing more clothing (although my feet were so frozen by the time I was done, that it felt like I was walking on stumps) but - the way that my flashlight shone on the trees above my head - fairly well douched what were pretty weak pics. to begin with.

I was so happy to realize that it had been worth it in a weird way though, when afterwards I overheard chatter 'round the fire 'bout "the woman taking her clothes off by the camper"..."did you see that?!" 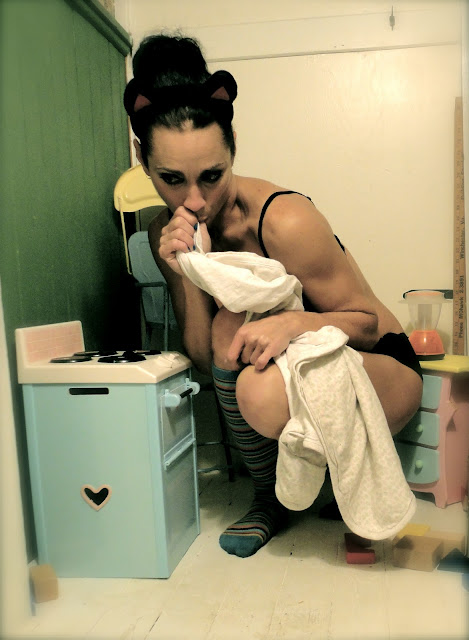 Although the photos were cruddy, I still felt a mild sense of accomplishment for having pulled off a shoot in front of that many people wearing as little clothing as I'd had on, and because of that I couldn't have been more pleased with my decision to go out for the second night in a row that weekend.

A few of my friends and I went inside the house (I don't even really remember why) and when we found this itty bitty playroom in a closet under the stairs - I knew that I could not leave the party without taking some pics. in there first. Again I asked for and was given permission (TA - you guys are the BEST!) and despite a much more up close and personal audience, I felt far more at ease doing this shoot than I had with the ones by the camper...(wonder why)

My friends poked their heads in and asked if it bothered me that peeps outside were taking my picture through a window, and as I'm sure you coulda guessed - it didn't...I swear the whole thing was too perfect - it was heaven! I was absolutely stunned that so much goodness had come from attending a neighborhood field party. And just when I thought that I'd reached the pinnacle of happiness... 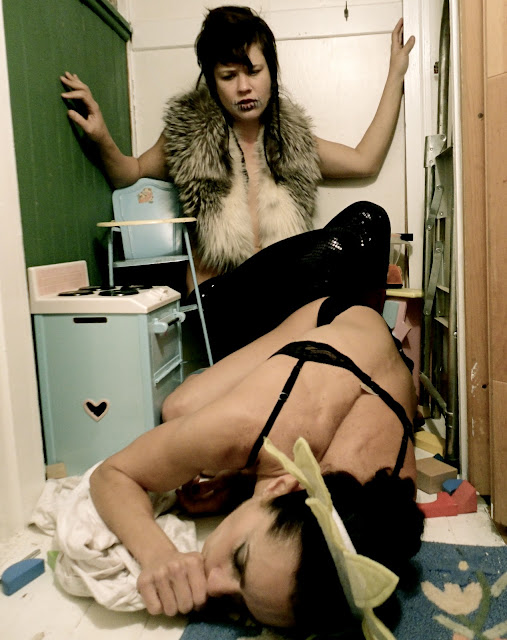 ...The Feral Kid squeeeezed into the tiny closet with me. She didn't waste a minute of precious time on long-winded "how do you do's" or inquiries as to what in the world I was doing - she's a like-minded artist, no need to explain...she totally "got" what I was doing. The Feral Kid shed her shirt (my kinda gal!) and got busy right away - collaborating with me on photo after photo - until my blasted camera battery died...

The whole thing was utterly amazing, truly. A virtual stranger shows up on my shoot (a kindred spirit in so many ways) we barely communicated about what we should do - we just did it - as if we already had, a hundred times before...And somehow we managed to snap some swell shots, in spite of the cramped, confining conditions in the closet...That girl was the shiz, I shiz you not!

Despite being slightly hungover Saturday and Sunday (a foreign sensation of late) I was delighted that I'd gotten out of the house to recreate. I so enjoyed seeing old friends and making new ones, but mostly I loved cultivating productivity...from play…