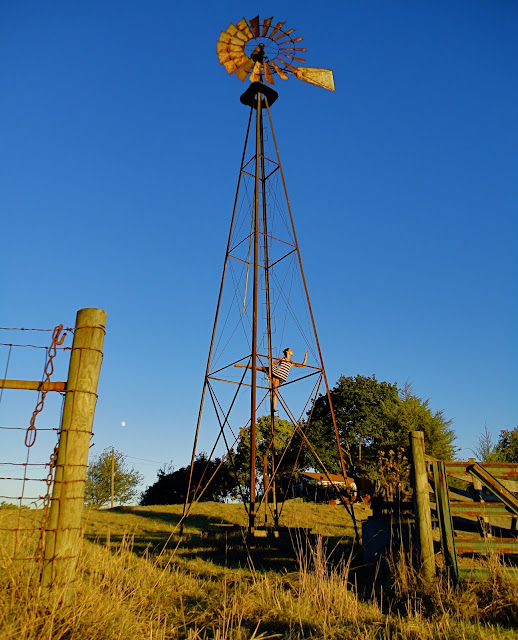 Ok, just a quick little post and then I'm on Big Ugly probation until I fulfill my obligations as a guest contributor to a friend's blog...more on that later. And yes - I will def tweet the link to my article as soon as it's up. Don't forget to follow @biguglyblog, if you don't already...THANKS!

So hey look, yooz guys - I got my windmill pics....finally!

Several times a week, I drive past this humble but tidy working farm with its noble windmill - forever standing sentinel...and for whatever reason, it seems like I'm always going past during that fleeting moment late in the day, when the sun bathes the gentle giant in a warm, amber glow. So it kinda goes without saying that I've been bandying about the idea of working in concert with such a delicious vignette, for quite some time now.

The first order of business in seeing my brainchild come to fruition, was to get permission from the property owners, to enter their cow fields and photograph myself at the feet of their windmill (or even on it, if they'd be so kind as to let me) Soooo...one evening, a week or so ago - I figured, "No time like the present" I got dressed and made-up and drove over to the farm, hopeful that the owners would allow me to take pics., that very night.

The nice woman who came outside to greet me, said the folks who owned the farm were not home at the moment, but she wrote down my number and assured me that she'd have them call and let me know...one way or the other. I was surprised to hear from 'em just a couple of hours later, and elated when they gave me the thumbs-up!

This past Monday marked the first break in my schedule (and with perfect weather, no less) in which to finally make time for the windmill pics.. Upon arriving at the farm, I went up to the house to check in with the people (before helping myself to their property) and again I was met by the "nice woman". She told me that the homeowners were away, but they'd explained to her that I did have permission to shoot there. I asked if she thought it would be ok for me to climb on the structure and she pointed out that it's equipped with a ladder-like thingy (joy!) and far as she knew it should be fine..."But be careful, because it is old...and I don't know how stable it is."

This was as high as I ever managed to climb, and since my 10 seconds were up before I could strike any sort of pseudo-elegant pose, I quickly pretended I was terrified instead...

Immediately after this picture was snapped, my good friend El Sol said, "That's it...time's up" and he dimmed the lights as he slipped away to retire until morning...


To be honest, his timing could not have been better. My poor abused feet were now begging for a break. They were throbbing from racing - full sprint across the ground, hitting hard on hidden landmines of half-buried limestone, and from frantically shinnying up the old, rusty ladder...like 40 flippin' times in a row...But you know something? I wouldn't even dare to complain. That's a small price to pay for the auspicious opportunity - to chase down that coveted windmill…