I Don't Really Read the Paper...Ever 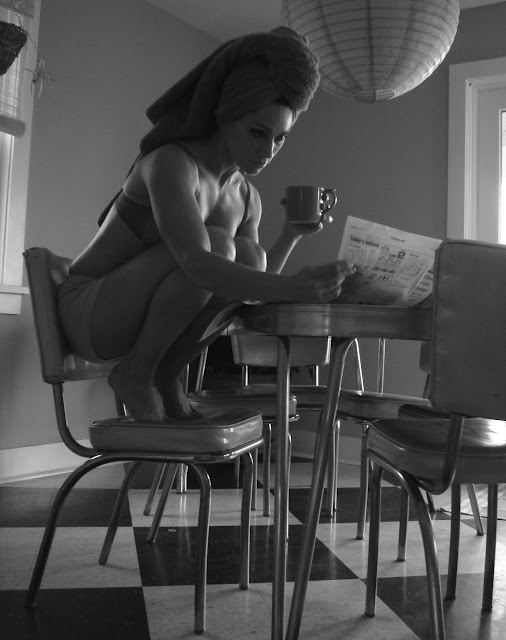 
While waffling over whether or not to post my very first #HNT pic., I remember pacing back and forth in my kitchen...all clammy and jittery with excitement and dread. I'm not even really sure why I was so nervous about posting a "half-nekkid"(!) photo of myself on the INTERNET(!) I mean like - what was the worst that could happen, you know? I'd rarely ever withheld the gruesome (i.e. mortifying) details of my sex life in my Big Ugly Bog, so why the hell was I worried about a little ole, semi-nude photograph of myself...floating around on the web...for everyone to see...until the end of time? In trying to decide if I should "fish or cut bait", I turned to the Twitter pal who had originally put the #HNT bug in my ear. His gentle coaxing and genuine reassurance that it would all be ok - was ultimately the kick in the pants that I needed, in order to finally bite the bullet and click "Upload"

Evidently, all it takes to get me motivated to pursue a new hobby, is just a wee bit of ego-stroking. After receiving a few positive remarks on my pic., I thought, "WOW! I've never gotten this kind of feedback on my blog!" Now quite convinced that I'd made the right decision to participate in Twitter's #HNT, I immediately began brainstorming the concept for my next shoot, and eagerly awaited the next available time slot in which to stage it.

It was winter still, and even though I'd lucked out with warm temps. and had been able to shoot that first series outdoors, by the time the next opportunity to shoot presented itself, I was forced to take my half-nakey pictures indoors - since the weather had reverted back to cold. Also back then, I was working during the day, and since my kids are always with me on Wednesdays, Thursdays and every other weekend (my free weekends - already booked with online dates) my time to snap pics. was somewhat limited. I decided to designate each Monday evening after work, as my weekly "photo shoot night".


In preparation for my first ever "photo shoot night", I left work, picked up a newspaper, eagerly hurried home, fed myself, fixed a cocktail (no, that's not actually coffee in the cup) got dressed (or undressed, rather) did my face...and set about taking this next group of pics..


While shooting this series I realized that as goofy as it felt, I was gonna have to warm up to the notion that a certain amount of "acting" would be necessary, in order to convincingly portray an idea. Although I was pretending it was morning, it was actually 6 or so in the evening...additionally, I've not read the paper in eons, nor sat at that particular table drinking coffee, since back when I was still married (over 6 years ago)...and my hair wasn't actually wet...psyche!


Folks seemed to dig this self-portrait, and compositionally I guess it's all right. But as is my affliction, all I see is everything that I wish I could change...it's underexposed, and so a little too fuzzy for my liking. There's not enough sharp contrast between the blacks and the whites, and again with my stupid, cloddish feet! If I'd just been up on my toes a tiny bit more, they wouldn't have looked nearly as clunky...Oh, and there is that little matter of the unsightly roll of pudge, draped over the waistband of my shorts...ugh...