On "The Land" and Off the Grid 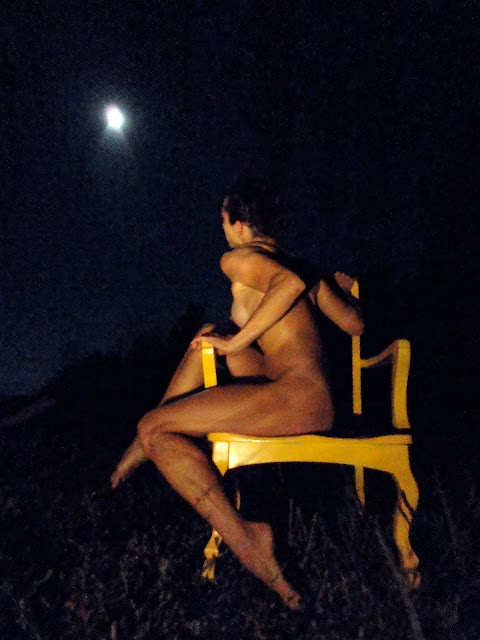 I'm just back from having spent the most refreshing and relaxing (albeit productive!) weekend on and around "The Land". "The Land" (as it has been tagged by my dear friend Copeland and her family) is a remote and scenic parcel of property in rural, central Virginia - on top of which sits the family's off-the-grid, pre-fab, modern design weekend home - now in its final stages of construction. This place is incredible you guys; the house, the land itself and the surrounding environs...I was absolutely blown away by the whole thing of it...as well as endlessly inspired by the seemingly infinite number of photo ops.. Trust me, I will return to "The Land"...often...

We arrived at "The Land" late last Friday evening, and after visiting with Copeland and her kids, and then bidding the children, "Goodnight", I couldn't resist taking my naked ass outside to snap pics. under the gorgeous moonlit sky, before I myself - turned in for the night...I even caught a glimpse of a shooting star...quel bonne chance! 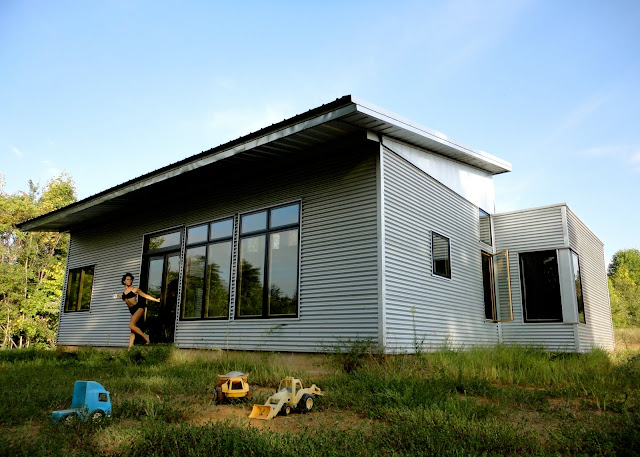 
Yep, this was def not a bad place to find myself in the morning...Oh - and in case you're wondering - that's authentic bed-head, yo...(got that shit honest...slept like a damn rock) but on top of that - there was very little I could do to fix it. You see at the moment, the only shower is an outdoor solar shower (brrr...) and the solar-powered electrical system has yet to be fully installed sooo...since I did not have the option of showering and re-styling (blow-drying, straightening) my hair for each different shoot, I had to be sorta creative in making due with what I had. Needless to say, I was glad that I'd had the accidental wherewithal to pack an assortment of hats, headbands and scarves...

While taking the pics. from the series above, it was funny to overhear one of Copeland's children through an open window exclaim, "Mama, she's wearing her bathing suit!" (Probably a good thing the child didn't realize that I was parading around in vintage lingerie...eh - what they don't know won't hurt 'em, right?) Understandably the tike musta thought I was nuts to endure the morning chill for the sake of taking half-naked pics. of myself... 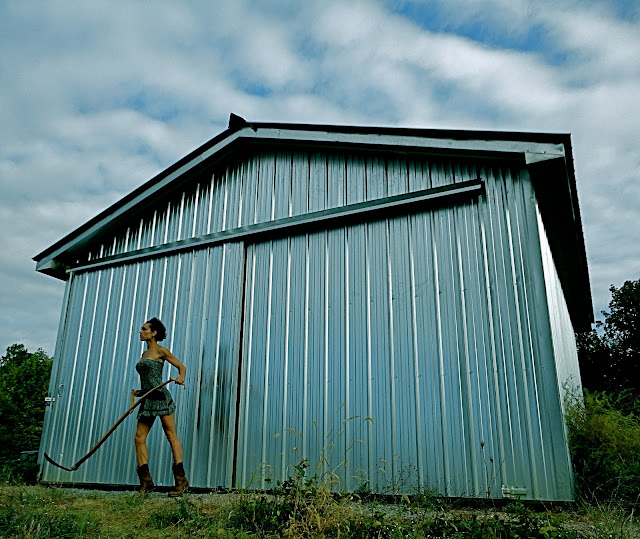 
After changin' up my garb and attempting to hog-tie my messy mop with a scarf, the children and I made our way out to the galvanized shed, inside of which I discovered Copeland's signature scythe (you'd have to know her to understand why it is deemed as such).

Although I'm probably not even holding the derned thing properly, and have no real knowledge of how to effectively implement such a tool...it did prove to be a handy little prop. 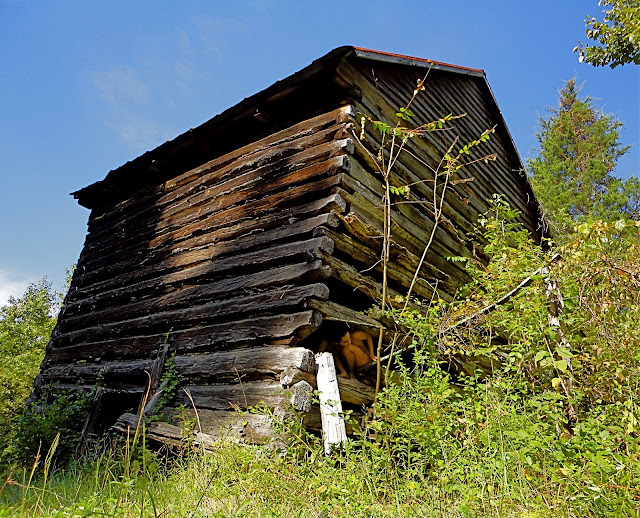 
In exploring the property for my next series of pics., I happened upon this old tobacco barn. I'll admit that its "Leaning Tower of Pisa" slant, warned that it might be best to stick with shooting myself strictly on the exterior of the seriously compromised structure, which I did do...at first...But when it comes to my self-portraits, I can be a bit foolhardy at times...especially if it means getting a somewhat grittier shot.

Later in the day, when Copeland clicked through my camera to view my new collection of pics., with a raised eyebrow she commented, "I couldn't figure out why you'd taken so many pictures of the tobacco barn, and then I realized that you were in them! These make me very nervous Lauralyn, tsk, tsk.........Soooo...what was it like in there, anyway?" 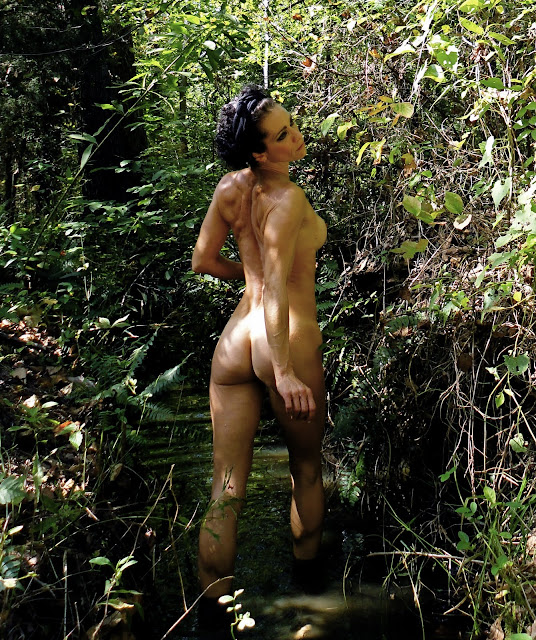 
Just a few feet away from the old tobacco barn, is a tiny foot bridge...and this creek. I was so lovin' that for 3 out of the 5 shoots, up to this point - I hadn't needed to worry with any sort of costume at all. I had started out wearing tall rubber boots for the photos that I took in the creek, but I nixed 'em completely, after only a couple of frames. 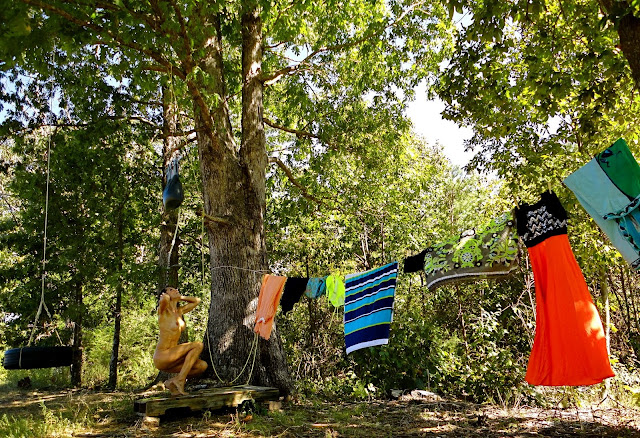 
As the day warmed up (and before Copeland's Handsome Husband showed up to join the rest of us) I decided to try out the solar shower, not so much to get clean (I never even bothered with soap or shampoo, and quite honestly - I hardly got wet!) but instead because I thought it might make for a nice group of pics....

Turns out - a bag of ice that I'd brought along in my cooler had melted and leaked all over the back of my car, and the real pisser was that most of the clothing in my duffel was either damp or completely soaked by the time I realized it. The necessity of hanging my clothes out to dry, was a bit of an unexpected nuisance - but in setting up the shot for these pics., I immediately saw it as a classic case of blind luck. 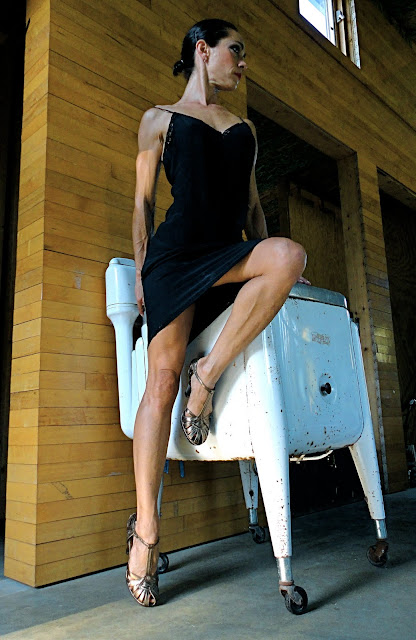 
I definitely prefer my method of utilizing the old wringer/washer, over its intended purpose and ultimate use...call me lazy but...

Btw, have I mentioned yet - how impressed I am by Copeland's determination to get "back to the basics"? Her commitment goes way above and beyond what most of us would consider "doing one's part" to save the planet. She literally looked at me like I had ten heads, when I naively asked if she was actually gonna use the old washer to launder the family's dirty clothes...she's a far better citizen than I, fo' shiz... 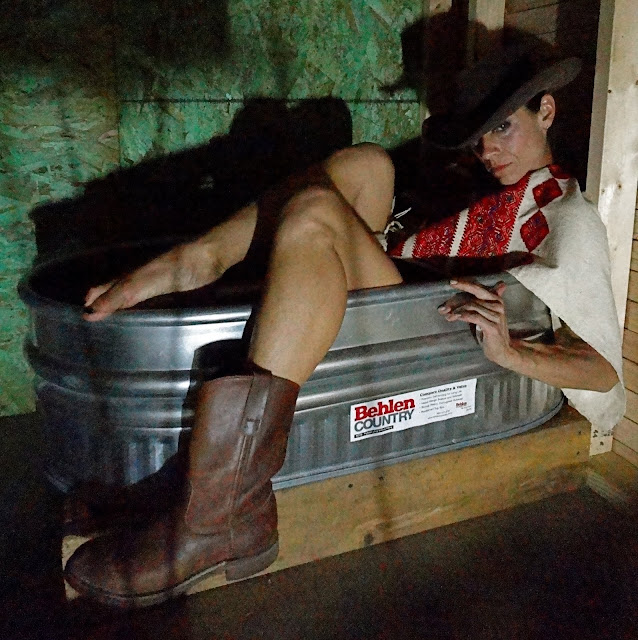 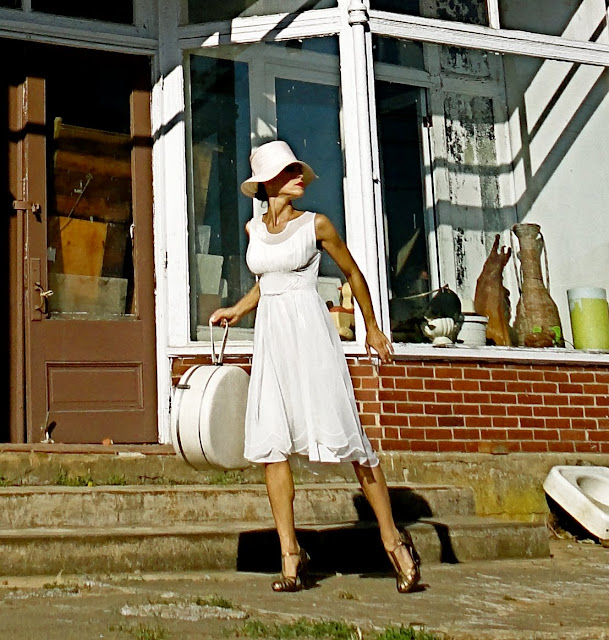 
Ever since driving through this ghostly little town, Friday evening on our way out to "The Land" - I had been salivating at the thought of snapping pics. here. I knew that the light would be best in the early part of the day, and so Sunday morning, I packed up my stuff, gave hugs and thanks to Copeland and her delightful fam...and said goodbye to "The Land" til next time.

After arriving on the scene, I got dressed in my car and then rapaciously snapped pictures (until my memory card was full) to an audience of one, a man...He is one of only a couple or so residents who still dwell along this otherwise abandoned Main Street...and he was an absolute gem. 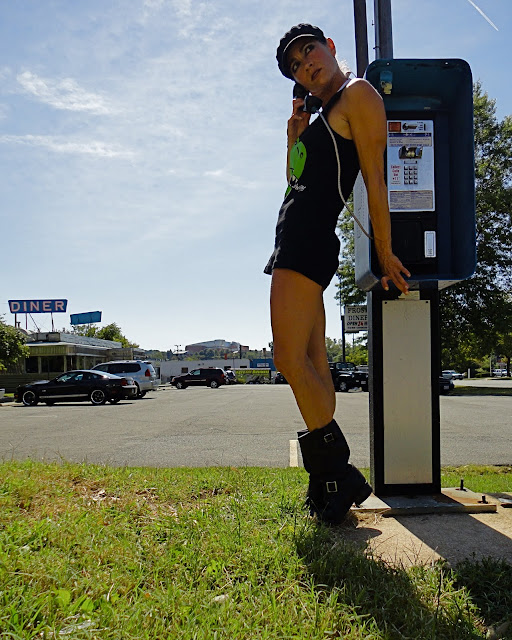 
As I drove towards home (more than 3 hours away) I spent the first leg of the trip reviewing the pics. on my cam (while simultaneously trying not to wreck my car) and deleted as many of the duds as I could, to create space for more pics., should something photo-worthy catch my eye.

I've been dying to do self-portraits by a pay phone, and I figured surely I'd find one somewhere along the back-country, two-lane road that I was traveling. But it wasn't until I got into the bigger small town of Warrenton, Va., that I came across not one, but two separate pay phones. Su-weet!

And so a BIG hearty "THANKS!" to my four gracious hosts (*muah*) and also to that surprise shooting star - which apparently did bring me luck...
Posted by Big Ugly at 11:02 AM