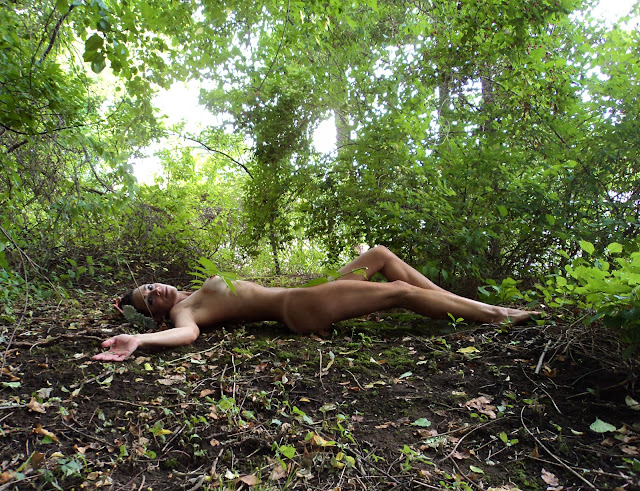 Looking back on it now, it's kinda hard for me to believe that I spent 4 whole months snapping half-nekkid pictures of myself, before I ran out of ideas or got bored enough or whatever, to venture away from my home and my yard to take pics..


I've definitely got a thing about trains, and since there are railroad tracks bordering the back end of my property, trains are an inescapable presence in my life. So it's no real surprise that my first big idea for a nearby "on location" shoot - should somehow incorporate the trains behind my house...preferably one covered in graffiti...but an unembellished train would certainly do.


Next, I had to figure out how I was to be dressed and ready, and within close enough proximity to the tracks (which are several acres behind my house and studio) to then be able to jump out and quickly photograph myself, in the fleeting moment before the train sped away...hmmm...now just how in the hell was I supposed to do all that?! My biggest issue was timing, since the trains don't run on any semblance of a predictable schedule. Many hours can elapse between the different trains passing, but it can be as few as 30 minutes...or less...


The strategy that came to mind, was to get myself dressed, tote my camera and junk to that side of my property, hang out until I could hear a train approaching, hop the fence, race to the crossing and fire off as many pics. as I could in the minute or so, before it was gone...seemed (sorta) feasible.


One problem was - I tend to get antsy when I'm idle, and so as soon as it registered that I could be waiting indefinitely...I kinda freaked out about sitting there doing absolutely nothing for an indeterminate period of time. But I came up with a solution. I got naked, picked some flowers, stuck 'em in my hair, and shot a whole series of wood nymph-ish photos in the interim. I was entertained and productive while I waited for the train.


After a little less than an hour though, I had exhausted the wood nymph concept completely. Largely because I hadn't wanted to migrate away from the narrow path where I'd been shooting, so that I might stay close to the section of collapsed fencing that I'd planned to climb over to get out on the road. But I couldn't move any closer to that spot, otherwise I would've been visible (in all my naked glory) to the cars and the curious number of cyclists going past that day.


Discouraged, I gave up - and went back to my studio to download the pics. that I had taken, and wouldn't you know it...not 10 minutes after I sat down at my desk, I could hear the train rumbling up the tracks.


I took the flowers outta my hair, quickly collected my stuff, and high-tailed it back across my yard. I spastically clambered over that crushed spot in the fence (getting hung up in the barbed-wire just a little) placed the camera on the table, set the timer on the camera, and then dashed over to figure out my pose. 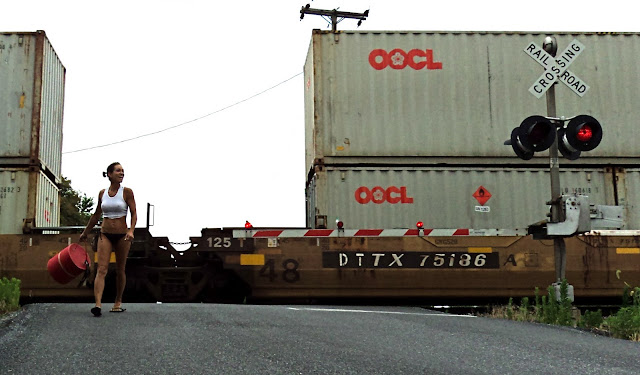 This was the sole image that I managed to capture, before the train disappeared out of sight...poop...But you know? As crappy as it is (and as dumpy as I look, ugh) it still signifies something of a landmark occasion - I left the farm to take pictures out in public.

Besides the the fact that I (for some reason) was heading back to my camera while the timer still ticked, and that I neglected to kick off my flip flops, before I had gotten into frame - once the adrenaline wore off - I also realized that I'd ripped a good chunk of meat outta my shin, presumably when I got hung up in the fence...yuck. 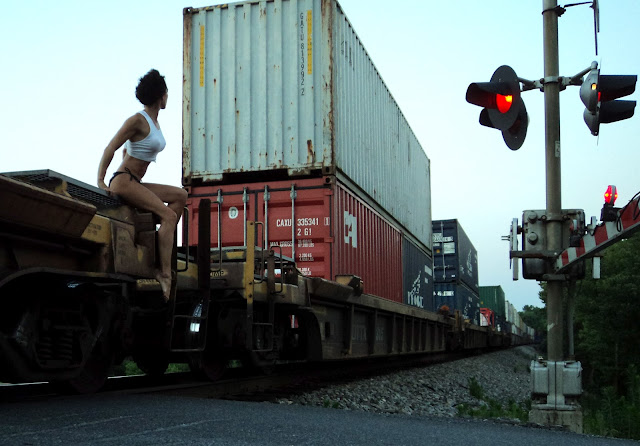 
I was so frustrated by my apparent inability to take a decent portrait with the train, that I pretty much gave up on it ever happening at all.

A few days after that first, failed attempt, while doodling on my Mac and scheming where to shoot next - yet another train roared by adding more salt to the wound. I hated that something that I'd always enjoyed, might forever remind me of my disheartening shortcoming... and just then something incredibly fortuitous took place... 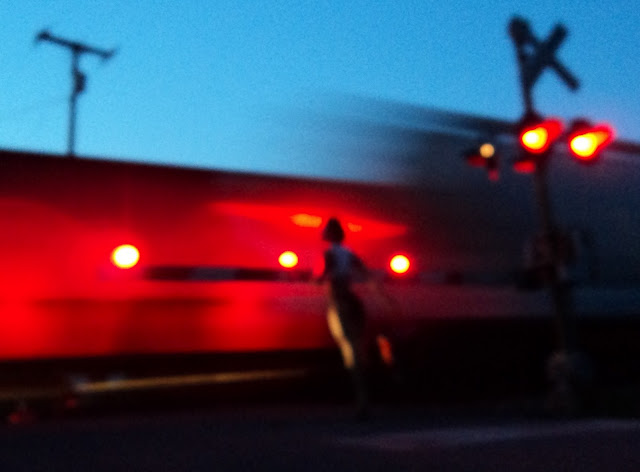 
Being that this entry is heavily-laden as it is, I won't bore you with the details of how I finally got 'em, the important thing is - that I did get my train pics....better even, than I'd imagined they'd be. And so rather than having become synonymous with defeat, the sound of the trains reminds me that anything is possible...it just sometimes takes timing...or luck…